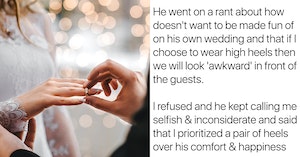 Shorter men are sadly often mocked for something they have no control over, which tends to lead to the development of a Napoleon Complex, where they try to overcompensate for their short stature with aggression and lashing out. This particularly gets highlighted when short men date women who are taller than them, as is the case for one woman whose fiancé was upset to learn that she planned to wear heels at their wedding.

The 27-year-old woman, higherGround77, posted on the popular ‘AITA’ subreddit after her sensitive partner, 31, got upset at her, asking if she was TA for wanting to look her best at her wedding.

“His height has always been a source of insecurity for him and he takes others comments too seriously,” she wrote. “With our wedding approaching, He asked if I’d consider wearing flat shoes at the wedding. I was confused, like very confused I asked if he was joking but he went on a rant about how doesn’t want to be made fun of on his own wedding. and that if I choose to wear high heels then we will look ‘awkward’ in the photos and in front of the guests. I refused and he kept calling me selfish and inconsiderate and said that I prioritized a [pair] of high heels over his comfort and happiness for the big day.”

He went so far as to get his mother to weigh in. “He had his mom involved and she is pushing me to reconsider. When I refused to discuss it she said that my unwillingness to cooperate is a huge indicator of my level of maturity, she then went on a long rant about what lengths ‘real wives’ are willing to go to to help out their husbands and said that I’m apparently too immature and shallow to be committed in a marriage if I make such an issue out of it.”

higherGround77 asked, “Am I being selfish? It’s not just about what I want but the high heels help make the wedding dress look better and I feel like I deserve to look my best at my own wedding just like every bride’s dream. His insecurity is preventing me from getting that. AITA?”

In edits, she clarified that she is only slightly taller than her 31-year-old fiancé and that the other men in his family are constantly making fun of him for his height. She added that this isn’t the first time he’s made a fuss about her wearing heels to events and that he “sometimes refuses to attend events with me.” All because of a pair of shoes.

The people of Reddit gave a mixture of ESH (Everyone Sucks Here) and NTA responses and added that OP’s fiancé should probably have a discussion with his relatives and friends who mock him.