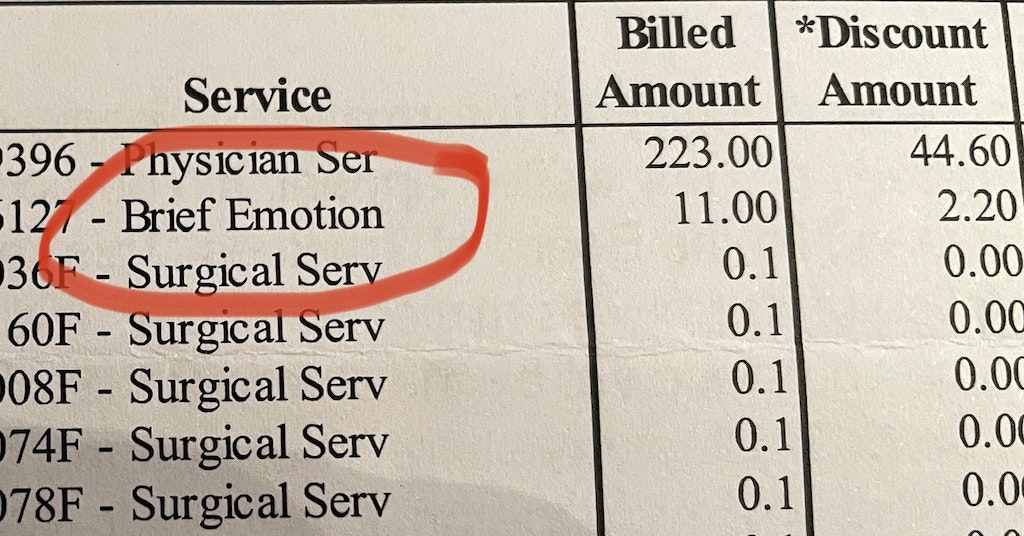 Hospital bills in the United States can be — and almost always are — outrageous on some level. Sometimes the line items included in unnecessarily astronomical bills are ridiculous, like $15 for a single Tylenol. But one woman claims she received a charge none of us have probably seen before: a charge for crying.

@mxmclain shared the bill she received for mole removal, amounting to $223 for the physician’s work, some assorted small surgical fees, and one $11 charge for “brief emotion.”

It didn’t take long for Twitter to start rolling out the jokes in response to the absurdity.

While the initial tweet makes it sound as if @mxmclain was charged for having emotions, as does the bill itself, that may not be quite the case.

In reality, some have pointed out that this most likely applies to a billing code that allows doctors to make a brief emotional/behavior assessment for things like depression, ADHD, or substance abuse.

Doctors can charge up to $25 for this “service,” up to four times a year. And while that may be appropriate and even useful in some scenarios, it’s hard to imagine why it would be necessary during a mole removal.