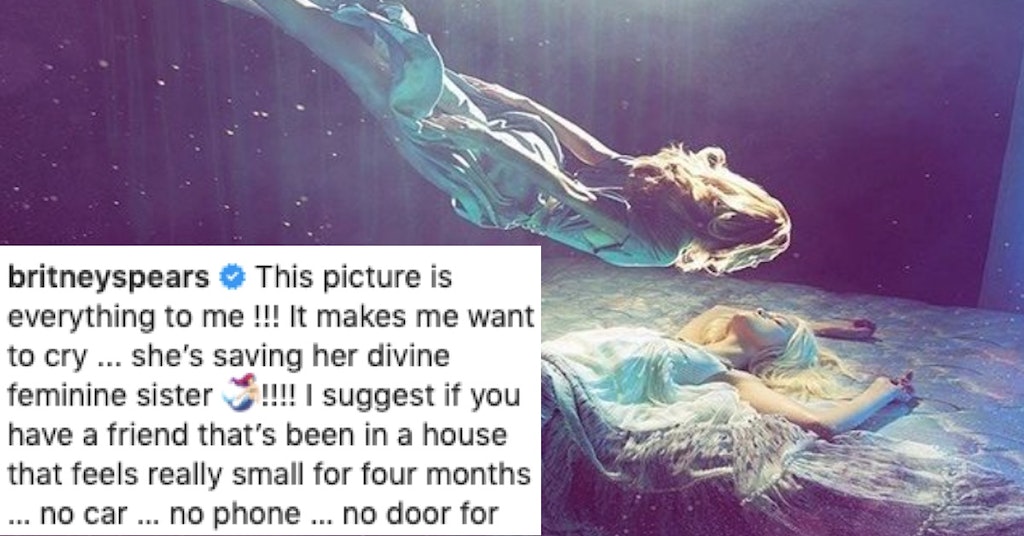 Britney Spears Calls Out Family For Abandoning Her To The Conservatorship

Last week, Britney Spears’ father Jamie Spears was suspended as the head of her conservatorship after a long public battle to “Free Britney.” Britney has allegedly been controlled by her dad for years, and he dictated the terms of her life to an alarming degree. With his removal, Britney almost immediately became engaged to her long-time boyfriend Sam Asghari, posted a few nudes, and then wrote on Instagram that she needs time to heal from the whole experience.

Britney has often used her Instagram to hide coded messages, even if some of them are now becoming more direct. In a new post, it seems as though Britney is calling out her family for how they failed to support her while she was under her dad’s control, in particular her sister, Jamie Lynn Spears.

The image is of a surreal painting of a woman passed out on a bare mattress, though the room looks as though it’s underwater. Above her, another woman floats, gazing at her. Britney seems to interpret this as a rescue attempt. She wrote in the caption:

This picture is everything to me !!! It makes me want to cry … she’s saving her divine feminine sister !!!! I suggest if you have a friend that’s been in a house that feels really small for four months … no car … no phone … no door for privacy and they have to work around 10 hours a day 7 days a week and give tons of blood weekly with never a day off … I strongly suggest you go pick up your friend and get them the hell outta there !!!!! If you’re like my family who says things like “sorry, you’re in a conservatorship” … probably thinking you’re different so they can f-ck with you !!!! Thankfully I found an amazing attorney Mathew Rosengart who has helped change my life !!!!

Britney’s lawyer Mathew Rosengart has been working to get her conservatorship suspended entirely.

Britney has been making allusions to “sisters” for a while now, according to BuzzFeed, and even wrote a response she has since deleted in which she seemed to be responding to Insta Stories made by Jamie Lynn.

In another post, she wrote that she was angry with her sister for performing her songs at award shows.

It may be a while before Britney is truly free of her legal ties, but she seems to be letting loose a little more every day.