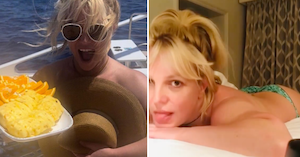 On Monday, Britney Spears released an audio recording on Instagram explaining her feelings about a controversial interview her ex-husband Kevin Federline and son Jayden gave. Federline has sole custody of Jayden and their other son Sean Preston. In that interview, which aired on “60 Minutes Australia,” Jayden said his grandfather “doesn’t deserve all the hatred he is getting in the media.”

Of course, Spears’ father Jamie has been criticized for keeping his daughter trapped in a 13-year conservatorship that seriously hampered her personal freedom, including her reproductive freedom to have children.

Spears has talked out in the past about how traumatizing being kept in a conservatorship has been for her. After Spears won her freedom in court, she has been living it up and sharing photos of herself enjoying life.

Jayden disapproved of his mother’s Instagram use, saying, “it’s almost like she has to post something on Instagram to get some attention. This has gone on for years and years and years, and there’s a high chance that this will never stop, but I’m hoping for me that she will stop.”

I mean, your poor mother! Let her have some fun.

The (now-deleted) three-minute recording begins with Spears saying, “I can totally understand why my family would have a problem with me doing my own thing, maybe ’cause I never have.”

“God would not [have allowed] that to happen to me if God existed. I don’t believe in God anymore because of the way my children and my family have treated me,” Spears also said.

“There is nothing to believe in anymore. I’m an atheist, y’all.”

In the recording, Spears also slammed her ex for benefitting from her financial resources: “Do you guys want me to get better so I can continue paying your dad 40 grand a month, or is the reasoning behind you guys deciding to be hateful is because it’s actually over in two years and you don’t get anything?”

She also addressed her son, who is now 15: “Jayden, as you undermine my behavior just like my whole family always has with, ‘Hope she gets better. I will pray for her’ — pray for what?”