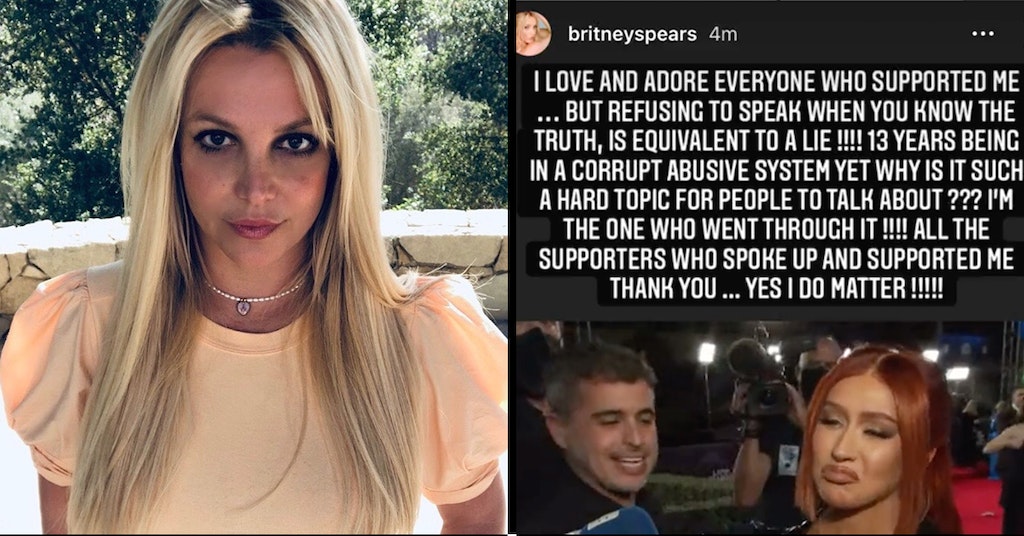 Now that Britney Spears is free to say and do whatever she wants, she is freely exercising that ability the rest of us tend to take for granted. And while one of the steps she’s taking along the way is thanking everyone who has supported her through the fight to break out of her 13-year conservatorship, she also has no qualms blasting those who aren’t.

Christina Aguilera, who was once considered Britney’s direct rival considering the early 2000s weren’t too friendly to the idea of multiple reigning princesses of pop, was recently asked a simple question about her former Mickey Mouse Club pal.

“Do you have any communication?” an interviewer asked after Aguilera talked about her new album on the red carpet of the Latin Grammys.

In front of all those cameras, Aguilera’s publicist immediately cut the line of questioning off, saying, “No, we’re not doing that today.”

Aguilera, meanwhile, made an exaggerated sad face and confirmed her publicist’s statement — “I can’t. But I’m happy for her.” — and walked away.

The awkward moment obviously didn’t go unnoticed, and eventually, Britney herself caught wind and reposted the clip with a little bit of scolding to go along with it.

“I love and adore everyone who supported me…but refusing to speak when you know the truth, is equivalent to a lie!!!!” she wrote. “13 years being in a corrupt abusive system yet why is it such a hard topic for people to talk about??? I’m the one who went through it!!!!”

The two pop stars have a long history together, initially working together on The Mickey Mouse Club as preteens.

When they both became incredibly successful pop stars, whatever bond may have existed then seemed to evaporate. The media constantly pit the two against each other and harped on anything suggesting an actual feud, which generally played out via interviews and quotes to the press.

Still, when the Free Britney movement reached a fever pitch in summer 2021, Aguilera was among those who spoke out and showed her support.

“To a woman who has worked under conditions and pressure unimaginable to most, I promise you she deserves all of the freedom possible to live her happiest life,” she wrote at the end of a Twitter thread. “My heart goes out to Britney. She deserves all the TRUE love and support in the world.”