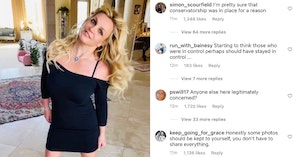 Certain chronically online folks have been engaging in sexist body policing like it’s 1999, expressing dubious “concern” after pop star and abusive conservatorship defeater Britney Spears posted a series of nude photos of herself on Instagram. This is the first drop of photos like this since the conservatorship ended, giving her back her freedom to do things like post the kinds of photos she wants to post on her own social media accounts, because she’s an adult.

Some even went so far as to say that Spears should have remained trapped in legal bondage at the hands of her father because she, like so many other celebrities and regular people have before her, make the personal choice to show her body. Then TMZ made things worse by highlighting these harmful and sexist “opinions” as though they were legitimate and not an awful thing to say about a real human being who just escaped an abusive nightmare.

Before the conservatorship was recently struck down after a long-fought battle for her freedom, Spears spent 14 years having her life, finances, and public appearance controlled by her father and other family members. Before that, she did nude or nearly nude photo shoots with a number of celebrity magazines and other outlets, some even when she was underage.

Some fans have pointed out that nobody seemed to think that Spears should have her rights and freedoms stripped when Rolling Stone photographers were telling her how to pose.

Although people did engage in body policing and a lot of concern trolling over her public image back in the late 90s and early 2000s when she was at the height of her stardom, that was mostly “think of the children” hysteria from people claiming she was setting a “bad example.” This sexist body policing has clearly maintained over the years as now people are suggesting the conservatorship was a good thing after she posted her own photos, as an adult with full control over the content, and posted them to her own Instagram.

“Starting to think those who were in control perhaps should have stayed in control,” one commenter wrote.

Although presenting these gross comments and the people pointing out how sexist and messed up they are as some kind of debate with two equal sides was not at all helpful, TMZ did at least manage to point out that nude photo shoots are very common.

Furthermore, even people who are not celebrities have been getting consensually photographed nude ever since the photograph was invented, and maybe we could all stand to chill out a little over the human body, especially those of women.

Fans and women everywhere are tired of people declaring that their bodies should be controlled, including by legal force.