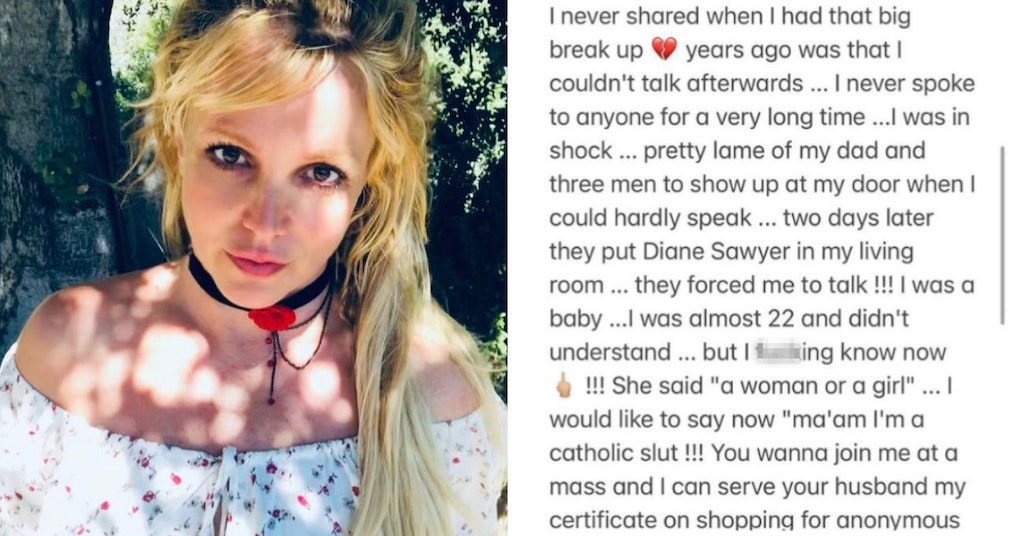 Britney Spears has posted another update on how her life is going post-conservatorship, and as usual, she is giving the fans exactly what they want by speaking her truth and going after the people who wronged her when she was too young to defend herself effectively. In a long Instagram post in which she talked about enjoying the simple freedoms of life, sleeping better, and the things she’s getting for her family members for Christmas, Spears called out decorated American television broadcast journalist Diane Sawyer for an old interview.

During the former conservatorship, Spears was legally barred from speaking on certain issues such as the media coverage that picked her apart in the early years of her career. Now freed from those constraints, the artist has begun to cut loose and turn the spotlight on those who mistreated her, including Sawyer, who she accused of approaching an interview with hostility during a time when Spears was nearly too depressed to speak.

“Do we dare forget the Diane Sawyer interview in my apartment almost 20 years ago?” she wrote. “What was it with the ‘you’re in the wrong’ approach? Geeze… and making me cry?? Seriously though… I lived in my apartment for a year and never spoke to anyone… my manager put that woman in my home and made me talk to her on national television. She asked me if I had a shopping problem!!! When did I have a problem with shopping?? When I never left my apartment???”

The interview Spears is referring to took place in 2003 shortly after the pop icon’s breakup with Justin Timberlake, which the media hyper-focused on for months, and was heavily featured in the docu-series Framing Britney Spears. Spears was just 21 at the time and clearly in a very vulnerable place while being barely old enough to legally drink, but Sawyer did not hold back.

Much of the interview focused on Spears’ body and the way she dressed during shows and for magazine photoshoots during a time when there was considerable hysteria over the “message” she was supposedly sending to young girls, who counted among her many fans. The journalist showed her several photos of herself in clothing considered “provocative” or whatever the line was at the time, seeming to try and press the young pop star into saying that she had gone too far with her outfits.

The shopping question was actually a straight accusation of Spears having a shopping addiction, which may have simply arisen out of the various stereotypes that were placed on the young woman by the public. Additionally, Sawyer questioned Spears about the Timberlake breakup, heavily suggesting that the whole thing was her fault.

“You did something that caused him so much pain…so much suffering,” said Sawyer. “What did you do?”

Spears ended up crying during the interview in the middle of these extremely personal questions, all for something the young singer never wanted to do but had it forced on her by her father.

“Something I never shared when I had that big breakup years ago was that I couldn’t talk afterwards,” Spears wrote on Instagram “I never spoke to anyone for a very long time… I was in shock… pretty lame of my dad and three men to show up at my door when I could hardly speak… two days later they put Diane Sawyer in my living room…they forced me to talk!!!”

As angry as she is that her dad made her do that, she remains irritated with the way Sawyer treated her, asking her questions about whether she was “a woman or a girl,” which is incredibly condescending when the subject is almost 22 even while taking advantage of someone too young to fully see how she was being taken advantage of.

“I was a baby… I was almost 22 and didn’t understand… but I fucking know now,” Spears added. “She said ‘a woman or a girl…’ I would like to say now, ‘Ma’am, I’m a Catholic slut!!! You wanna join me at a mass and I can serve your husband my certificate on shopping for anonymous players???’ I should spend a thousand dollars if I want every day of my life and she can kiss my white a–.”

Most of the Instagram post, however, was about how well Spears is doing with her restored freedom, able to actually withdraw $300 of her own money to buy gifts, chocolate, socks, and wine like a normal person. She repeatedly stated that she is “embarrassed” for the people who hurt and took advantage of her over all those years, as well as for the entire government of California for allowing it to go on. She also highly recommends the makeup brand Casa Gaga for girls and has rediscovered the joy of hot chocolate.