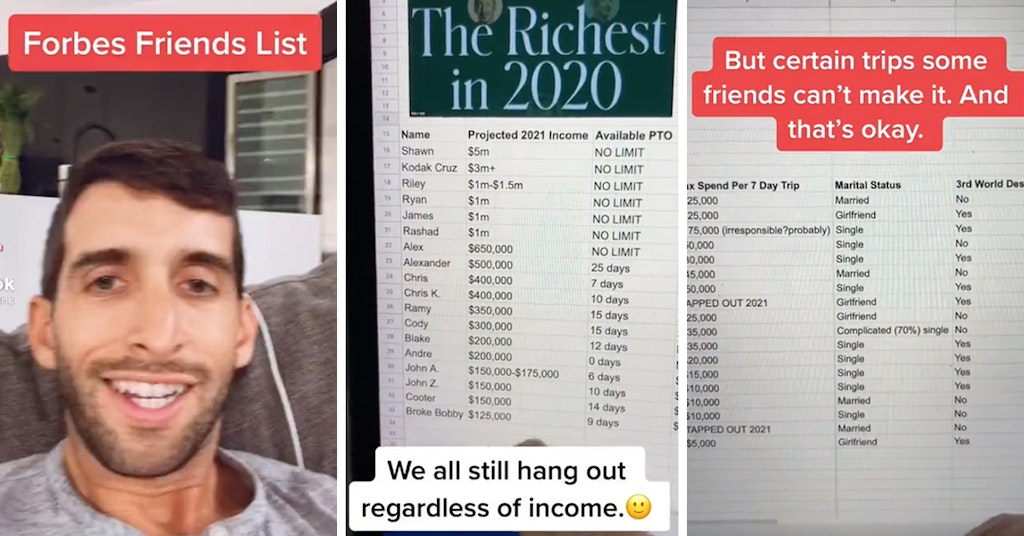 A TikToker’s decision to share a spreadsheet he maintains with his friends’ income levels and spending habits to reference when planning group trips is being met with incredulity from normal people.

Tom Cruz describes himself on TikTok as an “investor w/380+ rental houses,” which is already a dead giveaway that he’s pretty money-focused in his video content. But his video captioned “Forbes Friends List” goes outside the realm of tips and tricks for making wads of cash off of renters, as he explains the ranking system he and his friends have for planning vacations.

Apparently, Cruz and his pals track their income in a spreadsheet — ranked, of course — alongside additional information such as how much they’re willing to spend on trips, whether they’re willing to travel to “3rd World Destinations” or book a private flight, or if they’re a “degenerate gambler.”

That anyone would share something like this online as a helpful tip for planning trips with your friends is confounding, and plenty of people said as much.

But the main focus of commenters seemed to be on the last friend in the list — “Broke Bobby.”

Broke Bobby apparently makes $125,000 a year, roughly 4x the median income in the United States, but still gets that nickname since his friends make so much more than he does. And people are fascinated by it.

The whole thing actually gets worse when you realize that Cruz also did a follow-up video about the spreadsheet he keeps of his poorest friends.

Yes, he apparently still associates with a few people who make less than Broke Bobby, and they’re called the “Welfare 10.”

This group makes between $25,000 and $92,500 a year, with the exception of “Ramen Ryan” who was apparently unemployed at the time the list was made. This spreadsheet doesn’t even include an option for 7-day trips, as they assume these friends won’t be able to afford them, but does require them to specify whether they will eat somewhere besides chain restaurants and if they have airline points to get into first class.

Cruz says he believes the list is practical for their planning purposes so they know to only invite friends with the appropriate budget on their trips, and actually made another follow-up video to clarify that his millionaire friends are, like, totally friends with people on the “welfare” list.

“There’s no income segregation,” he said. “We all intermingle.”