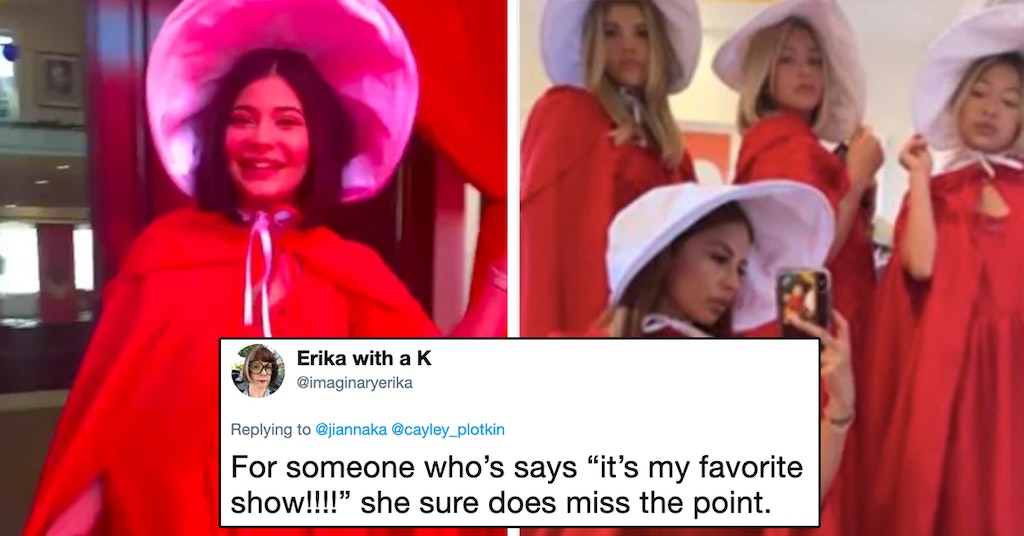 She took some video footage of the event, revealing her home decorated to look like the show complete with red-cloak-and-white-hat costumes for herself and her female guests to wear, and cocktails with names like “Praised Be” and “Under His Eye.” It doesn’t get any weirder than this.

If you didn’t know, the Handmaid’s Tale is a horrifying dystopian future story based on a novel by Margaret Atwood about a totalitarian regime that forces its few remaining fertile women into sexual slavery and baby incubating.

It has a lot of cultural relevance today in a country where abortion rights are under direct assault by a group of people some might argue want to see the Handmaid’s Tale become a reality, and also if you really wanted to, you could use it as a theme for a birthday party.

Predictably, people are not entirely happy with this strange and poorly-timed celebration of a piece of fiction that is far too close to becoming a reality in the U.S.

For someone who’s says “it’s my favorite show!!!!” she sure does miss the point.

This is a perfect example of, "Just because you can, doesn't mean you should."

Kylie Jenner is having a party themed after the Handmaid’s Tale…..so…..who’s gonna tell her that her party is literally celebrating female enslavement for their biological reproduction??

WHO IS GOING TO TELL HER

A dystopian fictional realm where women live under the violent rule of men? Festive! https://t.co/5UixpGgSfs

Kylie Jenner throwing a Handmaid’s Tale themed party, with her level of power and influence, whilst regressive abortion laws are being passed in her own country? pic.twitter.com/TYqUuvwtrM

Because nothing says “fun” like dressing up as women who are habitually raped and denied basic human rights.
🥳 pic.twitter.com/NBlbb7LExW

Show about a totalitarian state in which women have no agency but make it FASHUN BITCHESSSSSSS! Woooooo!!!

You know how the people who live in the capitol of the Hunger Games series just looooovvee watching the hunger games? That is the actual mood of Kylie Jenner saying the Handmaid’s Tale is her “favorite show” 😤😤😤🤬🤬🤬

I saw a Kylie Jenner stan try to defend the Handmaid’s Tale party by calling the book/series a celebration of women’s empowerment and mothers’ love. Laugh with me

Some people have never been told “no” in their entire lives and it shows.