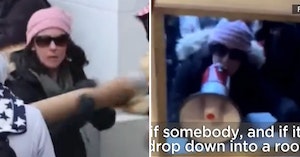 A woman featured in multiple photos and videos from the assault on the Capitol on January 6 has been identified as Rachel Powell of Pennsylvania shortly before speaking with The New Yorker on the phone from an undisclosed location. The FBI is currently seeking her for her role in the insurrection, particularly after footage circulated of her seeming to give instructions to the crowd on a bullhorn.

Previously known only as “bullhorn lady,” or “pink hat lady” for the hat she wore to the riot, Powell claimed that she was not part of any organized effort and was acting spontaneously.

“I was not part of a plot—organized, whatever,” she claimed. “I have no military background. . . . I’m a mom with eight kids. That’s it. I work. And I garden. And raise chickens. And sell cheese at a farmers’ market.”

When asked about why she appeared to give instructions to the crowd if she’s just a cheese peddler, her excuse seemed to suggest that she expected people to die that day.

“Listen, if somebody doesn’t help and direct people, then do more people die?” she said. “That’s all I’m going to say about that. I can’t say anymore. I need to talk to an attorney.”

Probably a smart move, there, Rachel.

Less smart was her defense of her use of the n-word, which interviewer Ronan Farrow brought up when she tried to claim far-right figures like Donald Trump and Alex Jones are not racist. She used the word herself in a tweet from 2013, which she defended by bringing up a book written in 1936 and set during the Civil War.

“My favorite book is ‘Gone with the Wind,’ and it uses that term freely,” she said.

She also admitted to being a COVID denier, anti-masker and anti-vaxxer, and went straight from that to being all about the utterly debunked election fraud conspiracy theory, surprising no one. If anything, this interview may serve as an example of what Facebook can do to people who don’t understand how internet technology works.

“You can go online, go on Facebook now, and dig up a thousand different links about it,” she said about the election fraud theory.

Though Powell declined to comment on certain incriminating actions, clear video footage from the thick of the fighting between Trump supporters and Capitol police shows her using a battering ram on of the building’s windows. The same woman was filmed from the inside of the building sticking her head through a broken window to tell a group of men, some in military gear, how to get into a neighboring room.

“In the other room on the other side of this door right here where you are standing, there is a glass that somebody, if it’s broken, you can drop down into a room underneath it,” she says in the video. “There’s also two doors in the other room. One in the rear, and one to the right as you go in.”

“So people should probably coordinate together if you’re going to take this building.”

That last line is really going to hurt her.

As far as anyone seems to know, Powell has not yet been detained by authorities, but it’s only a matter of time.