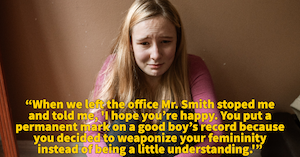 When you are not getting the support you need from your teachers, sometimes you have to use all the resources you have. One Redditor, who has been experiencing bullying from a classmate because of her family (two dads) told her teacher about the abuse, and she received no assistance whatsoever. So she did what a lot of people who don’t receive help do: she cried. She became “hysterical” and tried to use her tears to get someone to listen to her about the bullying. It worked. You know what? Good for her.

“I’m not in USA, even if this sound fake to you, here in South America things are really this bad guys. For a little backstory, I (15f) lost my mom when I was 5, dad raised me alone until last year when my second dad, whom I call papa, moved to our home. Now we are a happy family of four (me, two dads and dog). I’m not ashamed of my family so I never hid it, I’m not really popular at school so I just really told my friends and it was all good. Until about two months ago a boy I’ll call Duncan (15m) found out,” the OP writes.

“Duncan started simple with jokes like, ‘wow which one of them is the mom?’ Which I promptly told the teacher, Mr. Smith, who was like, ‘He’s just trying to understand, if you want people to understand you have to be patient.’

“Duncan started to escalate with ‘Enjoy your time here, it’ll get worse when your sinner family goes to hell’ and again I went to Mr. Smith who again was ‘You can’t be prejudiced with his religion, it’s wrong in the Bible. He’s is just trying to understand.'”

“In my country every class has only one responsible teacher so I couldn’t go to another btw. I have many examples but this paints the picture. After two months of that I realized that if I wanted him to stop I had to do it myself. So when he started with his homophobic sh*t at the cafeteria I started to remember the saddest thing I could, all movies where the dog dies. All the sad romance movies. Mufasas’ Death. The Fox and The Hound.”

“It didn’t take long for the waterworks to come. I started to bawl. Ugly sobbing while basically screaming at him asking why he said I would go to hell, why he hated me and my dads. Just making a huge scene. Duncan started to stutter and plead, trying to make me go to class with him and talk to the teacher (wonder why). I just cried louder and flinched when he tried to pull me away.

The scene was so huge that we ended up at the principals office. Ms.Yates listened to both sides and she was pissed at Mr. Smith, she let me tell the whole story even when Mr. Smith tried to interrupt me to defend Duncan. At the end Duncan got a 5 day suspension and the principal told me to go directly to her if ANYTHING like that happens again.”

“When we left the office Mr. Smith stoped me and told me, ‘I hope you’re happy. You put a permanent mark on a good boy’s record because you decided to weaponize your femininity instead of being a little understanding.’ He tried to make me apologize to Duncan but I told him I would go right back to the principals office if he did and he dropped it.”

“Then later Duncan’s friends started messaging me accusing me of acting like Amber Heard and ruining a boys life just because I can. I didn’t tell my parents yet because they are always afraid I’ll suffer because they choose to love each other and I’ll not bring anything I can handle to worry them. I don’t feel like I’m wrong, but with Mr. Smith’s warning and Duncan’s friends I’m starting to doubt , so AITA?”

No, no, no — not the a**hole at all. And honestly? It would have been legitimately understandable if she took it even further. This isn’t “weaponizing femininity” — whatever the hell that means. This is screaming for help in an uncaring environment.

“NTA. Go back to the principal and let her know what your teacher said, as well as what Duncan’s friends are messaging you about. I know you don’t want to get your parents involved, but I’d also suggest you do that. As it stands, you can’t approach Mr. Smith for non-homophobia related issues right now as well, because I wouldn’t trust him to do anything. Speak to your principal, and ask if you can be switched to another class,” said

“You’re not the a**hole. Duncan is discovering that Actions have consequences,” noted .

“And the consequences aren’t even what the teacher is saying they are. The idea that a suspension is going to “ruin his life” is ridiculous. One of the biggest lies ever told is that your “permanent record” at school matters. It ceases to mean anything the second you leave that school. Colleges don’t ask for it when you apply. Jobs certainly don’t. This kid is going to be just fine. Your teacher, however, needs to have his life ruined a little bit. Because his employment file does matter. I agree with the above posts that say you need to get yourself transferred into a different class. He’s absolutely going to take this out on you. He has no business teaching children,” said

“Hi my dear, i’m jumping on the top comment in hopes you see this. I am a teacher, and want you to know that nothing, nothing that Mr. Smith did was acceptable. You don’t owe bigots and bullies your understanding. And that mark on the boy’s record? He put that there through his behavior. You only made sure it was seen. Speak to Mrs. Yates about changing classes, tell her you’re afraid that Mr. Smith will take his anger out on you. NTA, but take care of yourself and talk to your parents about it so they can support you. You shouldn’t go through this alone,” advised

“NTA. Go back to the principal and tell your dads. This counts as harassment and an unsafe environment and your parents need to immediately start working with the school board to stop it,” said