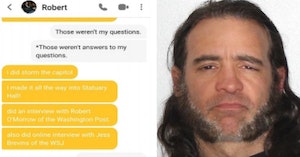 A man named Robert Chapman went down to D.C. from his home in Carmel, New York on January 6th, 2021. Like many people on a mini-vacation, he was cruising the dating apps, looking for a lady.

The one he found was not super happy with what Chapman was allegedly doing on January 6th, which was storming the Capitol building alongside a mob of Donald Trump supporters.

He messaged her all about it, and now their texts on Bumble are a part of the FBI case against him, NBC reports. Chapman was arrested on Thursday and charged with “trespassing and disorderly conduct on restricted government property.”

In his messages, he tells his Bumble match, “I did storm the Capitol. I made it all the way into Statuary Hall!”

After he tells her about all the exciting interviews he did with reporters at the Washington Post and the Wall Street Journal, she replies, “We are not a match.”

Daily Beast columnist Julia Davis tweeted that following this convo, the woman turned him in to the FBI. And unmatched, of course. The case against him does contain their communication, but there was a fair amount of social media evidence that Chapman was at the Capitol without it.

Prosecutors say the FBI received a number of social media posts in which Chapman can be seen in Statuary Hall and his own posts about it, plus one where a Facebook friend shared an image and captioned it, “My Dear friend and Brostar Robert made it in the Capitol building at the protest yesterday ….Woo Hooooooooo!!!!”

Yes. Woohoo for you, your friend is going to jail.

There are also posts under the username “Robert Erick,” who they believe to be Chapman, about leaving New York to go to D.C.

“Getting out of new York Sh-tty, the rotten apple. Gonna go down to the District of Criminality to Enjoy some much-deserved entertainment,” one post read.

The next day he posted that he was “INSIDE THE CRAPITOL!!!,” with photo evidence, and he appears on bodycam footage from the Metropolitan Police.

The moral is, don’t be afraid of dating apps when you’re actually the person doing all the snitching on yourself.