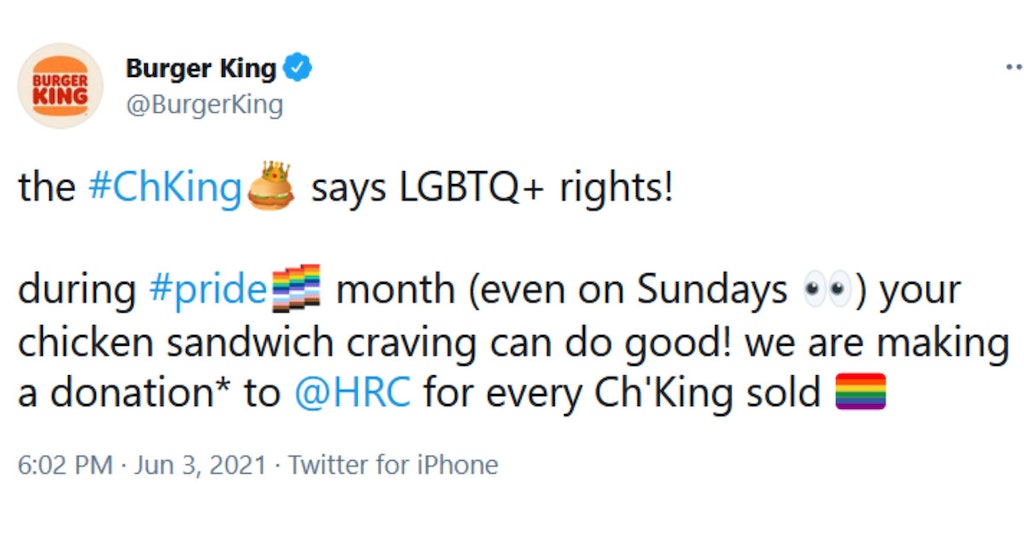 Burger King did a bit of trolling on rival fast food joint Chick-fil-A with a tweet promising to donate 40 cents to the Human Rights Campaign every time one of their “Ch’King” chicken sandwiches is sold during Pride Month, noting that they will do so “even on Sundays” with the eyes emoji.

This has been widely taken to be a shot at Chick-fil-A due to the chicken restaurant’s reputation of donating millions to homophobic hate groups and anti-LGBTQ+ politicians, landing the company in the middle of a fight between boycotters and homophobes over their allegedly palatable sandwiches.

“[T]he #ChKing says LGBTQ+ rights!” the Burger King Twitter account wrote, “during #pride month (even on Sundays) your chicken sandwich craving can do good! [W]e are making a donation* to @HRC for every Ch’King sold. The contribution will max out at $250,000.

The Human Rights Campaign is one of the largest groups in the world for LGBTQ+ rights and has organized protests directly against Chick-fil-A for the company’s support for organizations like the Fellowship of Christian Athletes and the Salvation Army, both of which are accused of explicitly anti-LGBTQ policies.

Chick-fil-A has attempted to end accusations of homophobic against their restaurants by promising to stop donating to homophobic groups but has broken this promise multiple times. Their latest claim was made in late 2019, claiming that their charitable gifts would be focused solely on “education, homelessness, and hunger.” However, they quickly backpedaled after getting backlash from homophobic conservatives, refusing to commit to ending their anti-LGBTQ donations.

“No organization will be excluded from future consideration–faith-based or non-faith-based,” said Chick-fil-A President and COO Tim Tassopoulos.

The company also announced in a statement that they were “happy and proud” of their 2018 donations, which included gifts to homophobic groups.

Burger King often trails in the fast-food wars and appears to be trying to gain some ground by branding itself as LGBTQ-friendly. However, it’s important to note that all charitable donations by large companies like this can be written off on their taxes and often end up being profitable thanks to their ability to utilize creative tax accounting while also gaining them positive press.

Conservative Christians, of course, are not being very positive about Burger King’s announcement, accusing them of somehow mocking and insulting all Christians by noting that donations would continue on Sundays and/or simply because they’re supporting the Human Rights Campaign.