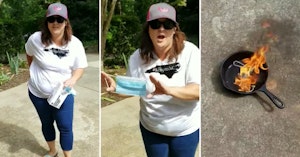 Despite COVID-19 cases still being on the rise, the United States continues to push for just about everything to reopen. While some local governments have been firm about mask requirements and social distancing protocols, others have just hoped residents would do the right thing.

But the insistence of some that the “freedom” not to wear a mask is more important than others’ freedom to not catch a virus with no known cure or vaccine is obviously stomping all over the polite requests of wishy-washy leaders.

Upon hearing that her governor is considering finally implementing a mandatory mask policy, a woman in North Carolina attempted to start a “burn your mask” challenge.

Ashley Smith posted a video to a Facebook page she runs, Reopen NC, earlier this week.

“As you know, we’re a group that is completely against mandatory anything. We’re for personal liberty and the Constitution and personal freedom,” she says. “I’m standing up and I’m saying ‘I will not comply.’”

Smith goes on to slam masks and anyone who wears them.

Holding a box of surgical masks, she insists that not only will they not protect the wearer from catching COVID-19, but they will not protect others should the wearer already have it.

“This does not prevent the spread of COVID,” she says. “This is not a sign of your compassion or how much you care for any other human being. This is a sign of control.”

This is in direct contradiction to suggestions from the Center for Disease Control and, you know, lots of scientists everywhere across the entire world.

While it’s true that surgical or cloth masks aren’t 100% effective at preventing spread, they can greatly reduce the risk by blocking droplets carrying coronavirus particles from being transmitted from person to person.

Obviously, this is all culminating in Smith burning her mask.

“I think it’s gonna be big,” she says, begging people to buy masks to burn them and hashtag their videos with the name of her organization as well as #IgniteFreedom.

Then she sets her mask on fire in a frying pan. And complains that it was made in China anyway.

The challenge is not catching on.

Smith’s command to fellow anti-maskers to burn their masks probably isn’t catching on, in part, because the people who don’t want to wear masks just never bought any.

But the comments on her video are also just overwhelmingly negative, suggesting that maybe there is actually a chance people are waking up to how important mask-wearing is in order for us to get through this pandemic until a proper vaccine is made.

“What you have said is one of the most insanely idiotic things I’ve ever heard,” wrote Jon Montgomery. “At no point in your rambling, incoherent response were you even close to anything that could be considered a rational thought. We are all now dumber having listened to it. You will be awarded no points. And may God have mercy on your soul.”

Another Facebook commenter, Janet Stubbs Thomas, shared the same sentiment many had while watching the video — just donate the freaking masks instead of buying up supplies and setting them on fire to own the libs or whatever.

“Please donate to a nursing home or medical offices!! Or schools! They’re having a hard time procuring PPE & in many cases overpay for it,” she wrote.

Ah, logic and consideration. If only we could normalize those things instead of…setting random stuff on fire to try to go viral.