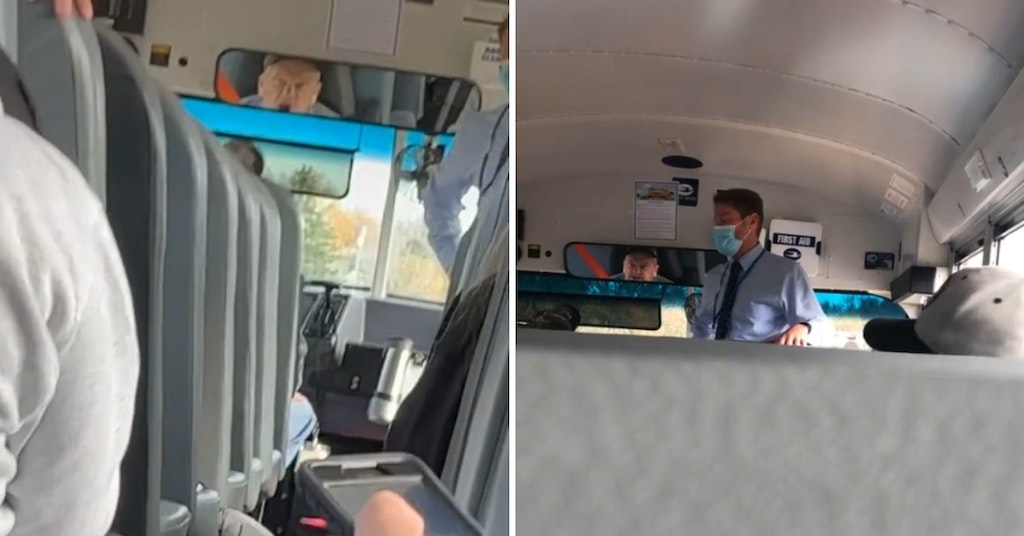 Students at the Greater LaTrobe Senior High School banded together to create a TikTok account and post multiple videos from different perspectives showing the aftermath of a school bus driver allegedly slamming on his breaks more than once, possibly in retaliation for some unknown offense. The students say that this reckless behavior from an out-of-control furious driver resulted in multiple injuries including hurt necks and backs, headaches, and even concussions. At least one student got a bloody nose from the ride.

In the videos, the driver can be heard arguing with a single student that he accuses of knowing someone who did something that he had a big problem with. He threatens her, saying she’s in a “world of trouble” and pressures her to tell on whoever he thinks is the offender, but she refuses. Regardless, viewers are widely outraged at the behavior of the driver who definitely should not be intentionally injuring students with reckless driving no matter what some student allegedly did.

Although there is no video footage of the alleged break-slamming, the bus driver does himself no favors by essentially admitting to the dangerous action when accused of it by students shortly after refusing to open the bus doors to let them out so they could get on another bus.

“You slammed on the breaks and cracked all our necks and gave her a bloody nose,” one student says.

“I don’t care what I did!” the driver screams.

A longer video seems to show another school administrator getting on the bus to “mediate,” and when a student calmly explains what the driver did that caused a bus full of injuries, he again doesn’t deny it and expresses no remorse.

“He slammed on the breaks, all of our necks got injured and she has a bloody nose. That’s how hard [he slammed],” says the student.

Prior to this, he sounds like he even admits to slamming on the breaks, though it’s hard to understand exactly what he’s saying. He can also be heard loudly swearing in multiple videos, claiming that he’s “old enough” to do so, which is not typically a high school’s policy on the issue.

Another video shows the mediating administrator asking the students to sit down, but many speak up to say that they no longer feel safe on the bus, saying that their usual bus is just behind them and they’d rather get on that one.

“I don’t even feel safe in this bus anymore,” says one.

At that point, most of the students stand up to get off the bus and are allowed to exit as the administrator can be heard asking who has the bloody nose.

It’s unclear why they were on a different bus than normal or if this man was regular staff or a substitute. In spite of the videos collectively gaining close to a million views, it does not appear that the high school has yet released a statement on the incident.

Commenters on TikTok have largely expressed horror at the actions of the driver and encouragement for the students who stood up for themselves and their safety. Although young students can become rowdy and even endanger safety on the school bus, the vast majority feel that there is no excuse for this kind of disrespect and verbal abuse toward children, let alone endangering them all by slamming on the breaks.

“Yes, some kids are disrespectful,” wrote one commenter. “However an adult in a position of power driving a large vehicle needs to be able to control their frustration [a]nd manage it in a healthier manner. Kids need to be held accountable but a bus driver shouldn’t put all their lives at risk because they are upset.”

“I’m glad you were able to document this, this is literally insane,” wrote another. “Hope he gets fired.”