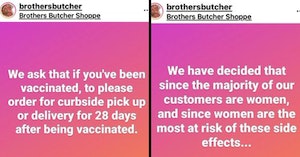 One of the many unfortunate things we’ve learned about humans this year is how many simply don’t believe in science. And somehow, at the same time, how many are all too willing to believe random pseudo-science claims that have no basis in reality.

While some people are refusing to get vaccinated at all—despite the vaccines being both safe and effective against preventing the spread of the pandemic that’s dominated our lives for the past year—some are under the misconception that merely being around vaccinated people will somehow harm them.

A Canadian store called Brothers Butcher Shoppe declared over the weekend that vaccinated customers must only do curbside delivery until 28 days after they’ve been vaccinated.

An Instagram post noted that they decided this “since the majority of our customers are women and since are the most at risk of these side effects,” and also claimed that they consulted a doctor about their decision.

In reality, the decision seems to be based on a conspiracy theory that being in the vicinity of someone who has been vaccinated against COVID-19 can somehow impact a person’s menstrual cycle or cause them to miscarry.

They aren’t the only shop to force guidelines on customers based on COVID vaccine conspiracy theories.

That’s right—these people aren’t worried about catching COVID-19, but they are concerned about somehow catching an irregular period from someone inoculated against the virus.

The theory has spread among anti-vaxxers and conspiracy theorists through memes and anonymous anecdotes shared on social media.

Doctors and scientists have repeatedly come out to say it’s not possible for a vaccine to somehow transfer and have a negative effect on someone who didn’t even receive it themselves, but the people who buy into this in the first place aren’t the sorts of people who generally listen to doctors and scientists.

That a shop is actually banning vaccinated people from coming inside over this quackery is ridiculous, but unfortunately not as surprising as it once would’ve been considering all the anti-science COVID deniers have spewed during the pandemic.

And Brothers Butcher Shoppe isn’t the only place peddling this nonsense. After all, it was only a week ago that a private school in Miami, Florida, said that vaccinated teachers would no longer be allowed around students.

It’ll be a miracle if this pandemic ever ends.