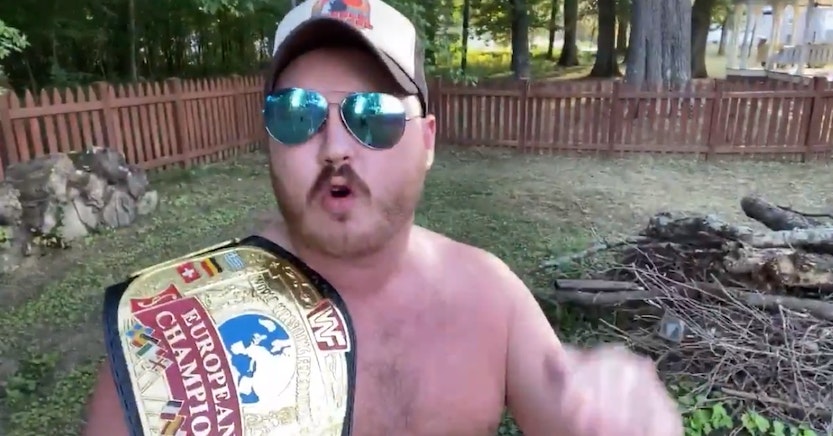 Various internet personalities have flourished in 2020 as people have little to do other than make videos at home after hearing about the latest way in which the Trump administration botched its pandemic response, but one of our favorites is probably Corey “The Buttercream Dream” Forrester. This comedian, who has put out a number of videos posing as a professional wrestler with a big championship belt perpetually over one shoulder, has people in stitches over his latest.

Forrester was not happy to hear the news about Donald Trump suggesting the 2020 election be delayed following the death of former political rival Herman Cain from COVID-19 complications, and voiced those feelings as the Buttercream Dream.

“Why does it seem like every time I log on Twitter, I can’t scroll more than two seconds without seeing some chili-dog-poisoning level of diarrhea that you’re trying to pass off as a coherent thought,” says the Dream.

“About a week ago, you treated the coronavirus like it was a sexual harassment lawsuit, and just ignored the f*** out of it. But now, all of the sudden, when your ignorance killed Herman Cain, aka 85 percent of the Black vote, you think that maybe we should delay the election!”

The Dream then segued into what has become his signature video move — challenging Donald Trump to a wrestling match, which he did after pointing out that the president does not have the authority to change the date of the election.

“While we’re just out here saying s*** regardless of whether or not it could actually happen, I’d like to once again challenge you to a match.”

But not just any match. The Buttercream Dream specifically challenges Trump to a “ladder match,” which is literally a wrestling competition using real ladders to try and climb up and claim a hanging belt. Why? Because it gave the Dream an opportunity to land this burn:

“And at the top of that ladder will be an invisible belt, which will actually give you an advantage, because just like with your coronavirus conspiracies, you’re real good at reaching for s*** that ain’t there.”

Needless to say, people who are not Trump fans are rapidly becoming fans of the Buttercream Dream.