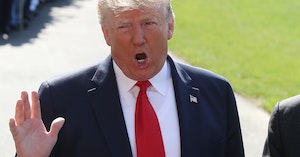 At this point, we’re all horribly familiar with Donald Trump calling every unpleasant truth about himself and his administration “fake news.” If only it were actually all fake! And if only it were just a random verbal tic.

In reality, Trump is doing the stuff journalists say, and him constantly saying “fake news” is an attack on the free press, which is a fundamental aspect of democracy. Trump seems to be gunning to become Emperor for life, so he needs to dismantle all the institutions keeping him in line. Hopefully, he’ll be impeached before he orders the robes, but in the meantime, an advertising agency is doing what they can to fight back.

Calgary advertising agency Wax Partnership and the Florida Chapter of the Society of Professional Journalists are working together, according to Newsweek, with a new tactic for shutting Trump up.

They’ve applied for a trademark on the phrase “fake news,” and say that every time Trump says it, he’ll be receiving a cease-and-desist letter.

They made a YouTube video explaining the project, and explain in the video’s description that it may be silly, but they want people to consider what the term “fake news” implies:

To get people to stop and think about how ‘fake news’ is being used, we here at the Society of Professional Journalists have filed a trademark on the term Fake News to prevent President Trump from misusing it to discredit stories, journalists and media outlets he simply doesn’t agree with. We’re even sending the White House a cease and desist letter every time he misuses the term.

Satirical? Yes. But absurd times call for absurd measures. We’re now seeing people using the term to dismiss truthful reporting that doesn’t align with their politics or views – a major problem for healthy discourse in a democracy. Hopefully this initiative gets people to pause and consider how the term is being applied. After all, the vast majority of news you hear called ‘fake’ isn’t actually fake.

The agency’s creative director Nick Asik told radio program The Calgary Eyeopener, “We want to use our powers of being advertisers to do good as well and not just sell stuff… It is not about whether the trademark gets approved or disapproved, at the heart of it is a media literacy campaign …it is really about being critical of the news that you read.”

The trademark is not officially approved yet, and it might not get approved. Some things can’t be trademarked once they’ve been circulating in popular culture for too long, and this is obviously meant as more of a stunt than a brand issue. But it is time to stop ignoring it when Trump says fake news. He might know what he’s up to, but plenty of his supporters do not.