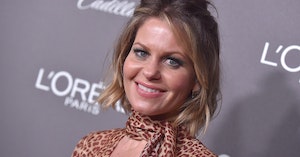 Candace Cameron Bure has come to be known as the queen of TV Christmas movies, something she hoped to bring with her as she moved from the Hallmark Channel to former CEO Bill Abbott’s new network, Great American Family (also known as GAC). But she recently made it clear there was one thing she wanted to leave behind — Hallmark’s shift towards LGBTQ+ inclusivity. And now, other celebrities are calling her out on it.

The drama started when Bure gave an interview to The Wall Street Journal promoting the network, and her new role as chief creative officer, ahead of the holidays. During that time, she praised GAC for wanting to create “wholesome content for an audience who wants to watch programming for and with the whole family,” and claiming Hallmark had become “a completely different network.”

Hallmark hasn’t become a whole different network, by any reasonable metric, but they have slowly started incorporating more LGBTQ+ characters into their content. This Christmas, they will have their first holiday film that centers fully around a same-sex couple — and it will undoubtedly be as chaste and family friendly as the rest of Hallmark’s content.

But that seems to be a line in the sand for Bure, who admitted to WSJ that her new Christian-oriented network intended to “keep traditional marriage at the core.”

Hearing Bure feels this way isn’t a shock, considering her aggressively Christian social media presence, but seeing an entire network being created out of protest that LGBTQ+ people might get an inch of ground in the TV Christmas movie market that dominates society every winter is a depressing occurrence in 2022.

Fortunately, other celebrities were quick to call her out on why pointedly excluding an entire community from these movies while drawing a line in the sand as to what’s “traditional” or “wholesome” (straight people) and what’s not (LGBTQ+ heathens, apparently) is perpetuating dangerous homophobia — not spreading love or promoting family.

One Tree Hill’s Hilarie Burton was among the first to respond, mincing no words in calling Bure and GAC what they are.

JoJo Siwa, who recently made nice with Bure after the latter expressed upset over the dancer calling her the “rudest celebrity” she’d ever met, also blasted her for her “rude and hurtful” comments.

And Jodie Sweetin, who starred with Bure in both Full House and its revival, Fuller House, expressed support for Siwa in the comments.

Sweetin also took to her Instagram stories the same day to share links for supporting trans youth during the holidays and promote GLAAD’s post about protecting same-sex marriage on a federal level, making her position crystal clear.

Some fans rushed to Bure’s defense, insisting that she has every right to her own personal beliefs. And while that may be true, that doesn’t make her immune to criticism for holding them, let alone sharing them publicly with the world. And it is certainly a problem when her homophobia is deployed to influence the general public through her movies, and her comments about those movies. Having certain religious beliefs isn’t something anyone can hide behind as an excuse for homophobia — it still is exactly what it is.

But for anyone more inclined towards inclusivity, Hallmark’s queer-inclusive Christmas movie, The Holiday Sitter, premieres on December 11.