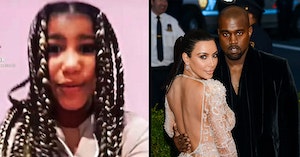 Candace Owens Sides With Kanye West Over Daughter’s TikTok Debate, Even Though No One Asked

After Kanye West decided to air his parenting grievances on Instagram recently, and he and Kim Kardashian trended on Twitter as a result, Candace Owens apparently saw it as a good opportunity to get in on the conversation.

Kanye hopped on the ‘gram to complain about his 8-year-old daughter, North, making TikToks with her mother (on a page controlled by her mother). In response, Kim made a rare public statement about their ongoing issues, claiming that Kanye is trying to exert control over them and requesting that parenting concerns be dealt with in private moving forward.

Most of the internet, in turn, asked to kindly stop being included in this narrative as Ye continues to rope all of us into their personal drama with his outbursts and oversharing.

But Owens, never one to skip out on a trending topic, waded in on Twitter to claim that Kim is wrong to let North be on TikTok.

“The psychological effects of social media on young girls is real and documented,” she wrote. “It’s actually Kanye that is trying to protect his daughter in this regard and Kim is spinning this as ‘obsession’ and ‘control.’”

It’s quite possible for multiple things to be true at once — in this case, you can agree that an 8-year-old may not need to be making TikTok videos while also seeing Kanye’s outburst as just the latest in a long line of attempts to turn the public against his ex and be both obsessive and controlling. It can also be true that Owens didn’t need to get involved in the conversation to begin with, and likely only did so to jump in on the drama bandwagon of the day.

Kanye, of course, was thrilled to have the support of the rightwing pot-stirrer, calling her “the only noteworthy person to speak on this issue” and claiming other celebrities have been texting him privately to express their support.

“I will no longer put my hand through a blender to hug my children,” he wrote in all caps. “My mother took me to Chicago when I was  and told my dad if he came to Chicago he would never see me again so I bought the house next door I dream of a world where [dads] can still be heroes.”

How Kanye interpreted anything that happened to mean he needs to defend the idea that dads can be heroes is anyone’s guess, although that’s par for the course when it comes to interpreting statements from Kanye.

Hopefully he and Kim will work things out someplace the rest of us don’t have to hear every detail of it — if only so we don’t have to deal with the likes of Candace Owens using it to increase her own visibility. Maybe social media is bad for every last one of us, after all.