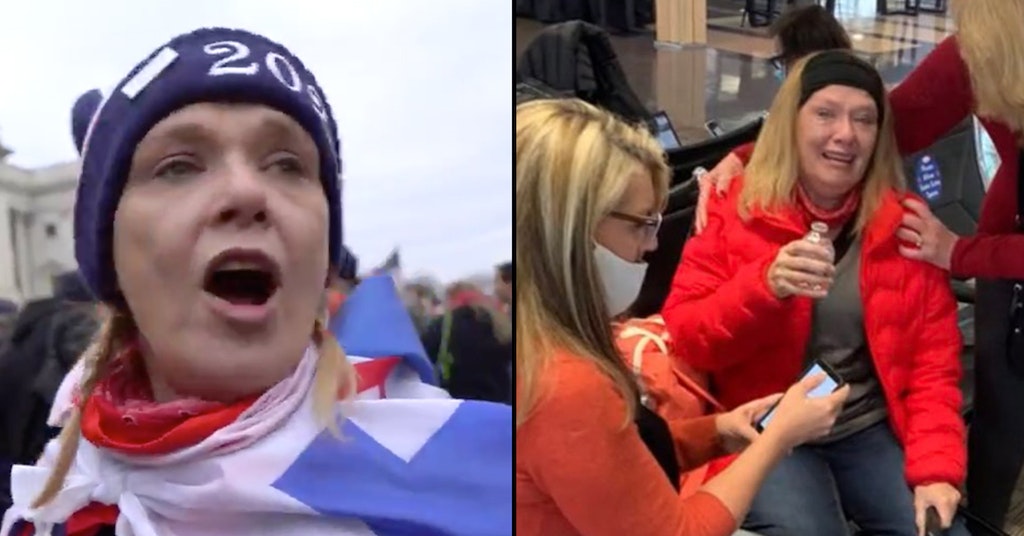 
A Minnesota woman who participated in the Capitol riot was booted from a flight, captured in a viral video from someone who had the foresight to record it and post it to Twitter on Sunday.

The woman, who identified herself as Melody Marie Black, was captured in this video being booted from a flight, asserting to a former fellow passenger that it was for "being loud."

There's also a Facebook video of the incident that the Post-Bulletin shared as part of its coverage.

Thrifty Traveler editor and fellow Minnesotan Kyle Potter, who also shared the video to his Twitter account, believed the plane to be a Delta Connection flight. Potter also ID'd her as a Capitol riot participant.

Freelance journalist Jared Goyette, who encountered Goyette at a 2019 riot, also shared Black in front of the Capitol asserting, "This is America, and we're all here to fight for our freedom."

Goyette then shared some "highlights" of Black in action at former protests. Here, in 2019, she was railing against Rep. Ilhan Omar (D-Minnesota).

And here, from 2017, she's walking back and forth over a pedestrian bridge with a flag, a one-woman counterprotest of sorts to the NFL kneeling protests.

WCCO, a Minneapolis-St. Paul radio station reporting the story on its site, stated that Black "was kicked off a Delta flight from Washington D.C. to Minneapolis after being identified as a member of the riot at the U.S. Capitol building last week."

The story went on to assert that she's one of a number of Capitol rioters who have been arrested, kicked off flights, lost jobs, or have otherwise experienced consequences for their alleged actions.