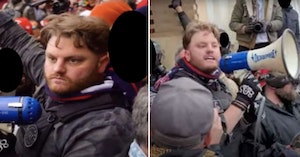 Accused Capitol insurrectionist Anthony Antonio and his attorney came up with an interesting new defense for his actions on January 6 involving his copious consumption of Fox News in the months leading up to the attempted coup.

According to Joseph Hurley, his client came down with “Foxitus” and/or “Foxmania” in what is perhaps the biggest own on the network in a courtroom since a court found that Tucker Carlson couldn’t be held responsible for his words because no reasonable person would believe them.

This news from the Thursday hearing was overshadowed by the absolute meltdown of Landon Copeland, another accused Capitol rioter who cussed out the judge in the same Zoom meeting and screamed “I object” when Hurley made the Foxitus claim.

Before being so rudely interrupted, Hurley said that Antonio had been laid off due to the pandemic and spent six months inside with four others who all watched a lot of Fox News, according to HuffPost.

“For the next approximate six months, Fox television played constantly,” he claimed. “He became hooked with what I call ‘Foxitus’ or ‘Foxmania’ and became interested in the political aspect and started believing what was being fed to him.”

He further claimed that Antonio was only following what he felt were the orders of then-President Donald Trump, who was later impeached for inciting the riot at the Capitol and was convinced he was serving the country. Video footage from January 6 shows Antonio in the middle of one of the most violent crowds from that day in a black tactical vest and a patch with the logo of the “Three Percenters,” an Islamophobic group described by the Anti-Defamation League as a militia movement.

In one clip, Antonio can be heard threatening Capitol police with “war.”

Antonio turned himself into authorities last month, not long after being interviewed by them and saying that he witnessed Officer Michael Fanone being attacked during the riot and that the two made eye contact as Fanone begged him for help. The defendant said he could see “death in the man’s eyes” as the officer was pulled into the crowd to be dragged down a set of stairs, repeatedly tasered, and beaten.

Whether the “Foxitus” defense is to be believed or not, this is certainly not good advertising for Fox News. It is, however, good news for everyone who hates the network.