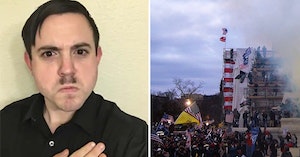 Photo via U.S. Attorney for the District of Columbia, Tyler Merbler/Flickr (CC BY 2.0)

The ever-growing list of people arrested on charges of participating in the January 6 assault on the Capitol is a veritable parade of nastiness, but Timothy Hale-Cusanelli of Colts Neck, New Jersey, is perhaps the worst yet. According to a report by The Washington Post, Hale-Cusanelli was widely known among coworkers as a white supremacist and Nazi sympathizer who even grew a whole Hitler mustache while working as a Navy contractor.

He also still remains an active member of the U.S. Army Reserve because the institution hasn’t bothered to take action on his status even though he was arrested some time ago and faces five charges related to the Capitol riot. As of now, he remains a sergeant in the Army Reserve with the 174th Infantry Brigade out of Joint Base McGuire-Dix-Lakehurst.

The comments attributed to this guy contain extreme antisemitism, ableism, and violence, so proceed with caution.

Investigators who interviewed the people Hale-Cusanelli worked with soon found that he regularly and openly expressed murderous hatred toward multiple groups of people targeted by the Nazis. According to the criminal complaint, a Navy petty officer told them that the insurrectionist once said that “Hitler should have finished the job.”

Another member of the Navy claimed Hale-Cusanelli once commented that “he would kill all the Jews and eat them for breakfast, lunch and dinner, and he wouldn’t need to season them because the salt from their tears would make it flavorful enough” if he were a Nazi. Of course, at that point, you pretty much are a Nazi.

He also reportedly said that “babies born with any deformities or disabilities should be shot in the forehead” — another common sentiment among WWII-era Nazis, who were firm believers in eugenics.

Although Hale-Cusanelli was once admonished by a supervisor for wearing his Hitler mustache, he was apparently allowed to continue working with both the U.S. Army and Navy in spite of openly saying these terrible things. Another supervisor, Sgt. John Getz, denied that Hale-Cusanelli is a white supremacist or even that he’s prejudiced in spite of admitting that he would walk up to people and ask “you’re not Jewish, are you?”

Getz said this was stated by Hale-Cusanelli in a way that was “joking but not,” but the sergeant didn’t feel the need to initially mention this in his letter to the courts because he “wasn’t personally offended” by this not-really-joking antisemitism.

Hale-Cusanelli was arrested after he was spotted shouting verbal abuse at Capitol police officers in video footage from the riot, as well as after bragging about being at said riot on social media. He also admitted to an informant that he stole a flagpole that was later used by another insurrectionist to assault a cop and urged people to “charge.”

The Army Reserve is reportedly reviewing Hale-Cusanelli’s case. Hopefully, all of these details will be enough for them to expel the Hitler fan from their ranks even though he’s apparently been awarded four awards for achievement and service from the institution.

An alarming number of the Capitol insurrectionists have turned out to be police officers or members of the U.S. military, and not all of them have been relieved of duty. Six officers from the Seattle Police Department alone were found to have attended the insurrection, but two of them were only placed on leave while the other four have continued to work as normal.