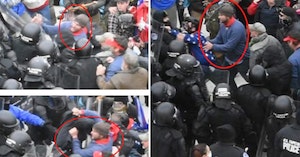 Capitol Rioter Loses It During Virtual Court Hearing—”Come F— With Me!”

Accused Capitol insurrectionist Landon Kenneth Copeland turned a virtual court hearing into an expletive-laden circus today even before it was his turn, forcing the court to mute him, remove him from the Zoom meeting entirely, and take multiple breaks before the defendant finally hung up. Copeland screamed f-bombs at the judge and loudly berated clerks, at one point even shouting “I object” while a lawyer for another accused rioter was speaking.

All of this was live-tweeted by NBC Washington Investigative Reporter Scott MacFarlane, and it just got worse as time went on.

Copeland reportedly arrived on the Zoom call ready to start trouble, bringing along several friends, one of whom was kicked off the meeting for having an “expletive” in his username. He also seemed unable to wait his turn, as the Zoom meeting was meant to get through multiple accused insurrectionists’ preliminary hearings. Several minutes before his lawyers were set to speak, he began shouting into his phone at the judge, interrupting other defendants’ hearings.

“Is any of this negotiable? I used to be a free man… until you locked me up.”

Then when another lawyer claimed that his client had “Foxitus” from several months of watching Fox News under the pandemic, Copeland shouted “I object” like it was some kind of very inaccurate courtroom show.

The court had to silence his phone until he was up, but when it was finally his turn, it wasn’t long before Copeland was in full meltdown mode, screaming at Magistrate Judge Robin Meriweather about his veteran status and cussing out the whole court.

MacFarlane further reported that Copeland used “brutal vulgarities” at the judge and screaming “f— all of you,” ranting that they can’t “get” him or “kill” him. The court had to put him in a Zoom “breakout room” to regain control of the hearing, but this did nothing to calm the defendant down. Once he was back, he continued to scream expletives, arguing with the judge, and somehow unmuting himself, until he finally hung up in the middle of his own hearing.

Copeland later called back into the hearing and told the judge that he’s “not just gonna listen to what you have to say.” Then he hung up again.

In the end, it looks like the court will be ordering a competency exam for Copeland, with his attorneys saying he’s “distressed.” Meanwhile, it sounds like the prosecution is considering making the case that he needs to be detained.

Copeland stands accused of not only participating in the attempted coup at the Capitol in January but assaulting multiple police officers with a “metal bike rack fence barricade” and stealing a riot shield, as well as shoving a fellow rioter into the police line. He has admitted to these actions, claiming that he thought “police officers were trying to ‘penetrate the line’ of the protesters and ‘steal’ individual members of the crowd.”