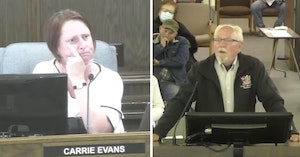 Lesbian Councilwoman In North Dakota Puts Homophobe In His Place

A councilwoman in North Dakota has gone viral after shutting a homophobe down beautifully during a council meeting.

Carrie Evans is the first openly lesbian elected official to serve in North Dakota, where some angry residents of both her town, Minot, and neighboring areas took issue with the rainbow flag being raised in front of City Hall for a single week this September in belated celebration of Pride.

What resulted were a parade of complaints as Evans and the rest of the council had to listen to homophobic rhetoric, cherry-picked Bible verses, and hate directed at the town’s LGBTQ population.

After one particular man took center stage to complain, Evans was compelled to respond to the vitriol.

At the start of the clip that’s circulating social media, the man was in the middle of warning Evans he would stop her from speaking as soon as he’d “heard enough,” until Mayor Shaun Sipma told him he did not have that kind of authority.

“I am proudly the first openly elected lesbian in North Dakota,” Evans said. “So that is why I’m not paying any heed to your crap. ‘We the people?’ I’m the people. I live in Minot. I [am] a taxpayer. I am a person.”

She reminded the man and all his homophobic friends gathered for the meeting that other groups also have flags raised at City Hall throughout the year, including flags in honor of POWs and for Juneteenth.

“We are not some group of people who live in San Francisco or Seattle. We are here. We are your elected officials, we are your brothers, we are your sisters,” she continued. “And don’t tell me you’re not hatred and anger. That’s all I feel. I’ve had to listen to it for days now, as has the mayor and many of my colleagues. It is unacceptable.

“This city is big enough for all of us. Me having a flag flying doesn’t take away anything from your rights and freedoms. But you know what it does for me? It shows me I live in a city that appreciates and embraces me, and the people of my community. And that I can live here and feel safe. That’s what it does. I’m sorry it doesn’t make you feel comfortable. But we’re here, we’re queer, and we’re not going away.”