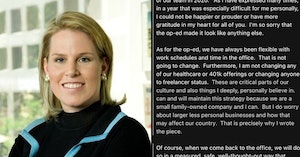 Washingtonian CEO Cathy Merrill found herself in a heap of trouble after publishing an op-ed in The Washington Post that sounded a wee bit threatening to workers reluctant to return to in-office work after the pandemic showed them how awesome working from home is.

In response to a suggestion that bosses might reclassify workers who don’t appreciate “office culture” as contractors, depriving them of any benefits, her own employees launched a work stoppage, refusing to publish any content in her D.C.-based magazine or website for the day.

“As members of the Washingtonian editorial staff, we want our CEO to understand the risks of not valuing our labor,” wrote senior editors Andrew Beaujon and Ann Limpert in identical tweets. “We are dismayed by Cathy Merrill’s public threat to our livelihoods. We will not be publishing today.”

Merrill’s op-ed quickly caught attention for a particular paragraph lauding what she called “office culture,” including all the “extra” work that she apparently thinks her workers should do even though it’s outside of their job description, and also the office birthday parties no one actually enjoys.

“I estimate that about 20 percent of every office job is outside one’s core responsibilities — ‘extra,'” she wrote. “It involves helping a colleague, mentoring more junior people, celebrating someone’s birthday — things that drive office culture.”

Many have already pointed out that all of those things can easily be done online, with perhaps the exception of gathering together to enjoy a not-so-great cake swiftly grabbed from the nearest grocery store. But the real problem with the opinion piece is what comes next.

“If the employee is rarely around to participate in those extras, management has a strong incentive to change their status to ‘contractor,'” said Merrill. “Instead of receiving a set salary, contractors are paid only for the work they do, either hourly or by appropriate output metrics. That would also mean not having to pay for health care, a 401(k) match and our share of FICA and Medicare taxes — benefits that in my company’s case add up roughly to an extra 15 percent of compensation.”

Not only did this sound like a threat to a lot of people, misclassifying workers who should be full employees as contractors is illegal in the U.S.

After the online backlash and work stoppage announcement, Merrill released a statement (sort of) apologizing for threatening her own workers with misclassification.

“I have assured our team that there will be no changes to benefits or employee status,” she wrote in an email to her staff. “I am sorry if the op-ed made it appear like anything else.”

She has also claimed the original op-ed headline, which warned her employees of “the risks of not returning to work in the office” was something she did not write and requested that it be changed to something that sounded less threatening. However, the content of the article has not changed.

Merrill also continued to hand-wring about the loss of “office culture” and its stale, poor-quality baked goods in her sort-of apology email.

“I do worry about larger, less personal businesses and how that may affect our country. That is precisely why I wrote the piece.”