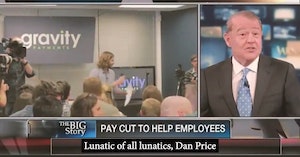 CEO Dan Price of credit card processing company Gravity Payments made a name for himself in 2015 by cutting his $1.1 million salary down to $70,000 so that all of the employees in his company could be paid the same or more. Price believed that paying his workers well would lead to drastic improvements in their personal lives that would translate to increased productivity and innovation in their jobs.

Fox News derided him as a “socialist” and predicted that the company would fail and that all those employees would soon be standing in “the welfare line.” Soon after Price’s decision, they pumped out stories claiming he had “fallen on hard times” and been “forced” to rent out his house to make ends meet.

Price tweeted out a video showing a compilation of criticism and failure predictions from right-wing media figures like Rush Limbaugh, who claimed that Price’s company would become “a case study in MBA programs on how socialism does not work.”

“Since then our revenue tripled, we’re a Harvard Business School case study & our employees had a 10x boom in homes bought,” wrote Price.

He also reports that his company’s turnover rate has been cut in half, their customer base has doubled, the number of workers at his company has increased by 70 percent and the same proportion has been able to pay down debt. The number of homes bought by these workers is particularly impressive considering the fact that Seattle, where the company is located, has some of the highest average housing costs in the nation.

Price did admit to struggling a bit in the beginning as Gravity Payments lost a couple of clients who feared the price of their services would go up, but they didn’t, and soon they were more than making up for the initial loss. Even in the pandemic, after first taking a 55 percent revenue hit “overnight,” the company quickly recovered and is now “giving out raises.”

If that wasn’t delicious enough, Price also called out Fox News for paying their production assistants minimum wage in New York City, where the cost of living is even higher than in Seattle.

“When I’ve been on Fox News, the production assistants who led me through backstage confided they were making min wage and struggling to get by in NYC,” he said. “I asked the hosts (who make seven figures and laughed at me on air) to talk about their workers’ pay on air. They always said no.”

The so-called socialist CEO reports that he doesn’t “miss anything about the millionaire lifestyle” and is happier now doing what he believes is right. He also says he’s still hiring more employees in order to “make workloads easier” for his current ones.