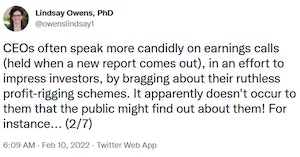 As prices on everyday essential items like all the food continue to rise across the board while the U.S. continues to struggle under an ongoing pandemic and rapidly disappearing eviction moratoriums and other protections, people are beginning to wonder what’s behind all the price hikes. Inflation is surely partially to blame, reaching a rate


that hasn’t been seen since 1982 and pushing general prices on consumer goods up by 7.5 percent.

However, this can’t explain why the price of eggs has risen by 13 percent or beef by 16 percent, with other grocery items spiking up in price even further to the dismay of families and low-income individuals everywhere. Enter economics and data expert Dr. Lindsay Owens, who didn’t actually need to use her Ph.D. to listen to corporate CEOs brag to investors on earnings calls about unnecessarily hiking up their prices in order to cash in while everyone is blaming the problem on inflation and stimulus checks.

According to Owens, Mike Roman, the CEO of 3M, a N95 mask manufacturer, bragged in just such a way on a call, saying that “the team has done a marvelous job in driving price” as the price of these life-preserving necessities have gone up “from 0.1% to 1.4% to 2.6%” during the pandemic. He doesn’t particularly worry that the public will find out about this, apparently, and neither do many of his fellow CEOs.

But the price hikes on masks are nothing compared to those on food, including those from massive corporations like Tyson that produce products sold to many millions of Americans daily. Tyson leaders boasted about raising their beef prices at a rate double that seen on the consumer price index, doubling their profits as a result, while raising the price on their chicken by 20 percent, referring to this gouging as “resilience.”

“Tyson, one of the big 4 meat monopolies Biden is targeting for price-fixing saw profits nearly DOUBLE after price hikes of 32% on beef and 20% on chicken which the CEO attributed to the ‘continued resilience of our multi-protein portfolio,'” wrote Owens.

The same thing is happening over at Johnson & Johnson, no surprise, as they report massive profits from vaccine sales and talk about the pandemic, which has now killed over 900,000 Americans and 5.8 million people worldwide, as an “opportunity.”

Meanwhile, over at Kimberly-Clark, a multinational paper-based product corporation that makes things like medical supplies and diapers, CEO Mike Hsu has been pontificating about the company’s “significant pricing actions” that earned then a nine percent increase in profits over the past fiscal year.

“If you want to understand the role of corporate greed in price hikes & inflation in America today, you don’t have to take the word of watchdogs or critics of corporations. CEO’s are admitting it themselves in plain daylight,” Owens concludes.

“And they’re betting they can get away with it.”