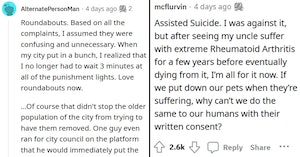 Perhaps one of the greatest human challenges, and one of the things we all think we should work harder at, is being open to new information and being able to change one’s opinion on things when the new information contradicts the old thinking. It seems like a simple and straightforward concept, but we’ve all probably witnessed others do mental backflips in order to avoid changing their minds on something because it would hurt their pride to admit they were ever wrong.

It’s an unfortunate problem, especially when some of the topics people don’t want to change their minds about turn out to be things that affect everyone, such as climate change, economic issues, healthcare, and other aspects of living in a society.

However, as much as it might seem impossible for some, people do change their minds when presented with evidence that proves them wrong, at least sometimes.

In fact, it’s happened enough to fill up a whole thread on Ask Reddit, where someone posed a key question that resulted in some of the most uplifting comments that might just restore your faith in humanity:

“What is something you changed your stance on after learning more about it?”

You might just learn something new yourself reading through these comments, like the fact that we don’t have an infinite supply of helium or that girls do not, in fact, have cooties. Some have changed their minds about little things like disc golf, roundabouts, and whether math is fun, while others have faced deeply serious human issues such as addiction, homelessness, mental illness, and assisted suicide.

Others stressed just how much empathy can be gained from talking to people who have been through a lot, telling stories about how they changed their minds about people when coming to understand how hard their lives have been. Truly, ideological flexibility is a virtue, although we’d be open to receiving new information proving that it’s not. Until then, enjoy these: