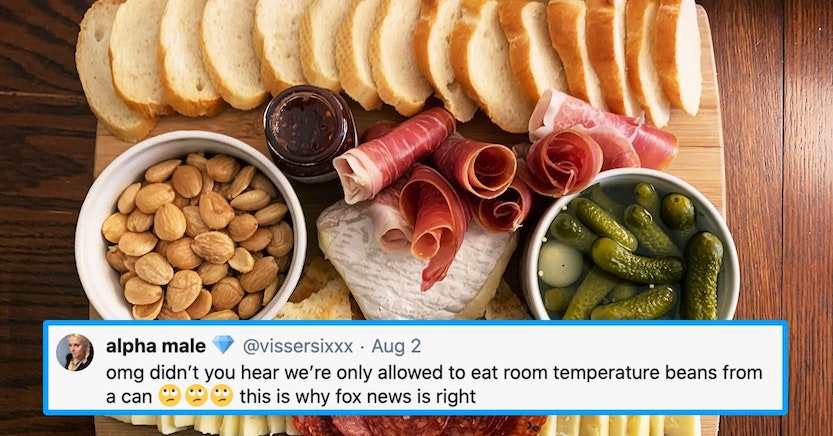 As if there isn’t enough to keep up with on social media these days, a photo of a charcuterie board sparked an intense debate on Twitter this month — is a nicely arranged platter of primarily cheese and meat a symbol of elite wealth or just…food?

The whole thing started when @cheesybeaver shared a delicious-looking spread she made for herself for lunch, something that is, of course, incredibly common to do on social media.

But one person soon took issue with the photo, turning it into a class issue.

“What rich people eat, I guess,” they wrote.

The original poster was having none of that, and fired back.

“This is the kind of sh—t I f—king hate,” she wrote. “I grew up on food stamps in the projects. I worked my a— off for every penny I have, which isn’t a lot, and which supports me and my parents.”

She also pointed out that this is a meal she made at home, for under $20, and split between two people over the course of the day.

What started as a celebration of a simple meal carefully arranged, photographed, and shared on Twitter for posterity soon turned into a heated debate, with everyone and their dog weighing in on whether they believe charcuterie boards to, at best, be a cloying homage to capitalist desires or if people are just being ridiculous.

Amidst all the back-and-forth, a number of people pointed out that charcuterie boards, much like avocados on toast, have long been a meal enjoyed by working class people out of necessity. The rich don’t have a corner on bread and cheese, it’s only when they slap an outrageous price tag on it that it becomes something perhaps a little darker.

Anyway, here are some pictures of other awesome charcuterie boards people shared in light of the, um, controversy:

Wherever you land on the charcuterie board discourse, it’s clear we’ve all lost sight of the most important thing: at least it’s not cake.