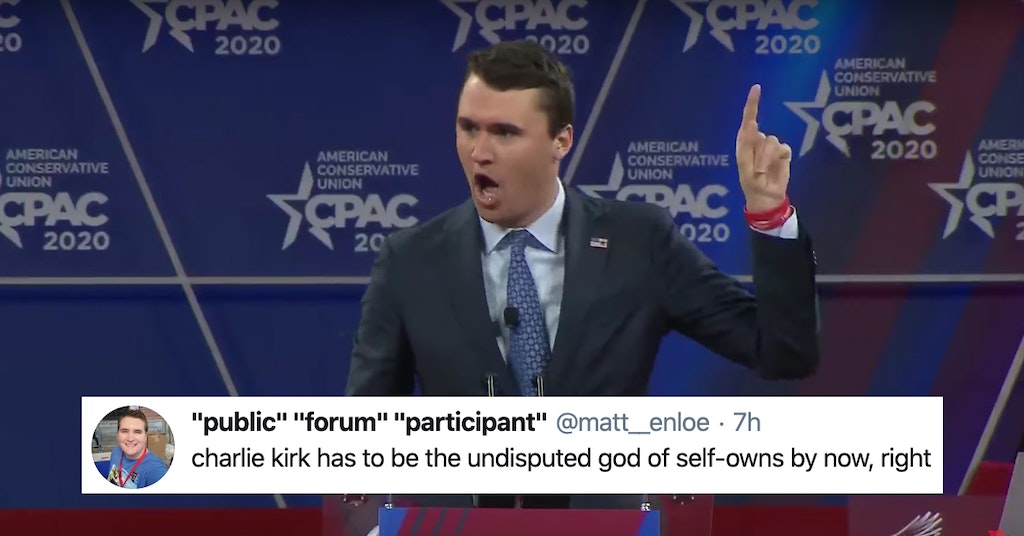 Charlie Kirk, founder of the right-wing nonprofit propaganda organization Turning Point USA and subject of a number of very weird and hilarious memes, seems to be harboring a secret crush on presidential candidate Senator Bernie Sanders, judging by his CPAC speech. The Conservative Political Action Conference started Wednesday and will be going for the rest of the week, and Kirk’s speech today contained a strangely complimentary comment about the progressive candidate.

Charlie Kirk complains that wearing a Bernie Sanders shirt will get you high-fives and “invites to the coolest parties.”

“And I’ll tell you, if you want to be a rebel on a college campus, wearing a Bernie Sanders shirt will get you thumbs up, high-fives, and invites to all the coolest parties,” said Kirk.

You heard it here, kids. Supporting Bernie Sanders is the coolest.

Kirk’s actual attempted point what that “true rebellion” means wearing MAGA hats on college campuses. He may be confused about who college kids are typically rebelling against. People don’t go to college to rebel against the coolest parties thrown by their peers.

Charlie Kirk wasn’t invited to any parties in college, was he? Either that, or he really does have a secret crush on Sanders. He even wrote an opinion piece for Newsweek titled “Why Bernie Sanders Can Win.”

Then there was the literal socialism pillar spotted at CPAC:

Kicking off the day at CPAC. As part of the “America vs Socialism” theme, there’s a giant red pillar that just says SOCIALISM. pic.twitter.com/TrZHZQ8gRo

This kind of weirdness and pining to be noticed by the cool kids is pretty standard for Charlie Kirk, however. Twitter commenters wasted no time in pointing that out.

Why won’t they let Charlie Kirk into the cool parties?!? pic.twitter.com/0wDGfEAVtV

I love how the inference here is that all Kirk needs to do is wear a specific T-shirt to be invited to parties. Like anyone is gonna believe that lol

this is the guy who organized diaper-wearing on college campuses and he wonders why he doesn’t get invited to cool parties?

Others are simply impressed by the level of self-owning Kirk has demonstrated today.

charlie kirk has to be the undisputed god of self-owns by now, right

Is TPUSA having another after party this year, and if so what does this assertion imply

i own multiple bernie shirts, and if these are the coolest parties i shudder to think what charlie kirk’s party life is like

hate being threatened with a good time

the virgin charlie kirk vs the chad anyone with a tshirt https://t.co/LuEuiT9Izr