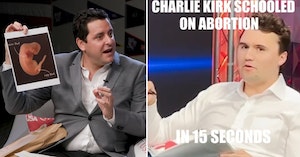 Comedian and satirist Ben Gleib hit the jackpot when he landed a spot on “Debate Night,” the video podcast of far-right talking head Charlie Kirk in which he claims to engage in anything resembling reasoned debate on various hot-button issues in the U.S. Kirk’s insistence on bringing in real and knowledgeable left-leaning human beings have left him in hot water before, but Gleib managed to throw Kirk off his game in under 15 seconds by showing that the host is clueless on the very basic science around the topic of the day: Abortion.

These “debates” are sometimes passed off as attempts by Kirk to make himself appear somehow willing and able to listen to people with different political stances and consider their points of view without bias. Anyway, the title given to the “debate” with Gleib on Kirk’s own YouTube channel is “A Long-Form Debate with a Deranged Pro-Abortion Activist.” The entire thing is close to 90 minutes long, minus Kirk’s introduction and anti-socialism ads, but Gleib clipped out a climactic moment that occurs a bit after the 26-minute mark.

Shortly after Kirk repeated the common anti-choice talking point about Planned Parenthood founder Margaret Sanger being a eugenicist, as though Kirk himself is not one, Gleib brought out his homework and presented the host with a photo of a fetus.

“Do you truly, in your heart of hearts, truly believe that this is a human being?” he says, holding up the image.

“Without a doubt,” Kirk answers without hesitation.

“This is a dolphin fetus,” Gleib announces.

Kirk is quite clearly thrown off his game by this little gotcha, mumbling and glancing at the camera while Gleib commences roasting him for something that any anti-choice activist should really see coming.

“Without a doubt a dolphin fetus is a human being?” Gleib repeats, incredulously. “This is a human fetus, look how similar they look, but quite different!”

“In life, you confuse dolphins for human babies often? You go to SeaWorld and you’re like ‘someone’s got human babies in that aquarium!'”

If you were wondering, Kirk makes a sloppy attempt to try and deflect from his lack of knowledge into the actual anatomy of the human fetuses he’s so enamored with by asking Gleib if there is a moral difference between killing a dolphin and a human. This is an entirely different issue, but we didn’t take Kirk for the kind of man who considered dolphins, as smart and awesome as they may be, to have the same level of personhood as a human. In a month or two we expect Kirk to announce his vegan diet.