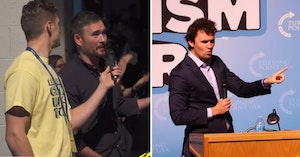 Right-wing rhetoric around utterly unverifiable election fraud claims and tyrant takeovers of America have reached their inevitable conclusion among a political group that has come to practically worship guns. A man asking a question of Charlie Kirk, the remaining Turning Point USA co-founder after the other guy died of COVID, during a Boise State University post-speech Q & A, a young man got up and literally asked him when he and his cohorts get to start murdering people with bullets.

“At this point, we’re living under corporate and medical fascism,” said the college student. “This is tyranny. When do we get to use the guns? No, and I’m not — that’s not a joke. I’m not saying it like that. I mean, literally, where’s the line? How many elections are they going to steal before we kill these people?”

His questions were answered with an alarming number of claps and cheers from the audience, though they definitely didn’t come from the entire auditorium and hopefully from a minority, but still, even Kirk himself was nervous enough from these inquiries to condemn them.

Kirk further warned that violence from the far-right would result in a government crackdown that could end their movement, which doesn’t quite match up with what’s happening to the January 6 rioters, but he’s at least anti-mass murdering Democrats at this juncture. However, the young man asking the question wasn’t so convinced that remaining peaceful would stop the government from taking over their “freedoms and liberties.”

“They’re already doing it,” he said.

Experts have been warning that the rhetoric coming out of the right would lead to real-world violence long before the assault on the Capitol, and then pointing to that same rhetoric to explain why it happened. Yet still, figures like Kirk have continued to push the lie that the election was stolen and are now going around to college campuses to tell impressionable young men that they’re living under fascism and tyranny and talking about taking the country back.

Kirk tried to draw “the line” that the audience member asked about as far into the distance, urging the men to wait until “we exhaust every single one of our state ability to push back against what’s happening.” The sentence doesn’t actually make sense, but he does outline the right-wing plan to increase their political influence, including by taking over local school boards.

Regardless of Kirk’s warnings, his kind of rhetoric has already led to violence (including at school board meetings) and will continue to do so as long as said rhetoric doesn’t change, which it hasn’t. Many regular people are now expressing concern that right-wing violence will explode at some point when they continue to fail to get what they want.