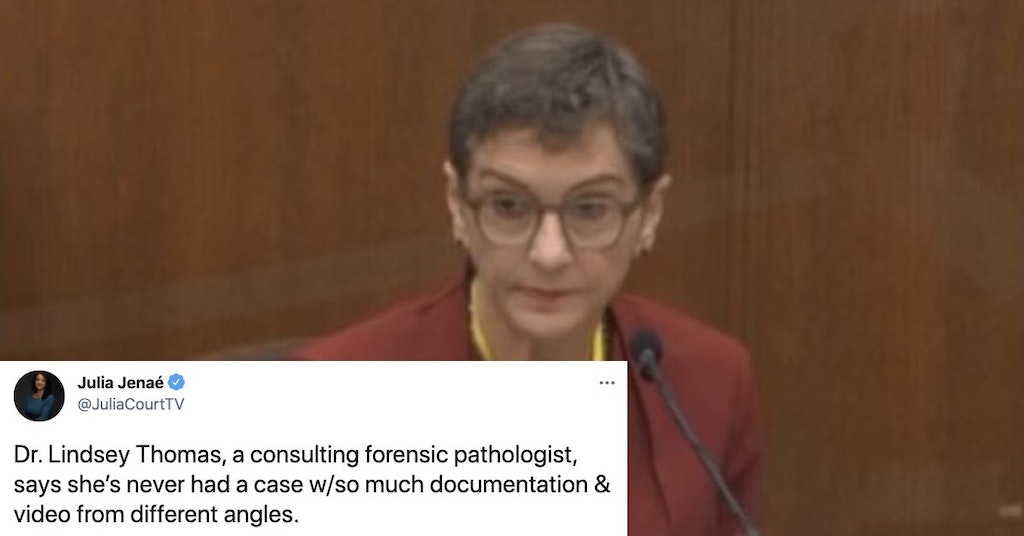 Derek Chauvin’s lawyer Erik Nelson seems to be on the ropes. On Friday, Nelson defended the ex-cop who kneeled on the neck of George Floyd by attacking forensic reports and ended up making a comparison that got worse and worse.

The moment came as he examined Dr. Lindsey Thomas, a forensic pathologist and medical examiner in Minnesota according to Vice News. As he questioned Dr. Thomas, Nelson compared how Floyd was pushed into the ground and kneeled on to going to the chiropractor or lying by the pool.

“I could be laying by the pool in Florida, on my stomach in the prone position,” Nelson suggested. “Not inherently dangerous.”

Thomas trained the medical examiner responsible for Floyd’s autopsy, though she is now retired. In addition to suggesting that being kneeled on is akin to going to the pool, Nelson tried to imply literally anything else was responsible for Floyd’s death, bringing up drug side effects and the size of the human heart, as Floyd had a blockage in his. Except he didn’t die of a heart attack, he died from a lack of oxygen according to the testimony of pulmonologist Dr. Martin Tobin.

“You were asked a number of questions that were to the effect that if we take the police subdual, restraint, and neck compression out of this, what would you conclude Mr. Floyd to have been?” Blackwell asked Dr. Thomas. “Aren’t those questions a lot like asking, ‘Mrs. Lincoln, if we take John Wilkes Booth out of this…'”

Judge Peter Cahill stopped Blackwell there, because the argument was “argumentative,” but people picked up what he was laying down.

“The cause of death was the law enforcement subdual, restraint, and neck compression,” Thomas said. “And the manner of death was homicide.”