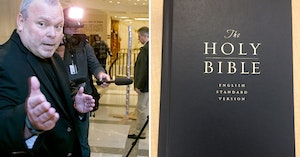 Florida Activist Petitions Schools To Ban The Bible For Depictions Of Rape, Bestiality, And Other Atrocities

A Florida man is redeeming the tarnished reputation of all Florida men by turning the current right-wing book banning bonanza around on itself by asking the state’s schools to ban the Bible, citing a long list of horrific content not appropriate for children. While the conservative mob whips up anti-LGBTQ hysteria in their power grab attempt, declaring that simple drawings of teenagers fantasizing about consensual sex acts are pornography, Chaz Stevens is asking why kids are allowed to read the Bible.

The entire content of the letter to MDCPS Superintendent Jose Dotres is pretty hilarious.

“I wish to file such an objection, requesting the Miami-Dade County Public School system immediately remove the Bible from the classroom, library, and any instructional material,” he wrote. “And, as is often the case with banned books, I ask your agency lay flame to that giant stack of fiction in a pyre worthy of a Viking sendoff.”

He didn’t limit his objections to sexual content, either. He also addressed the fake right-wing panic over Critical Race Theory, an advanced concept taught almost exclusively in graduate school programs, pointing out that the Bible contains many references to slavery.

“With the constant babbling concerns about teaching Critical Race Theory, should we not take stock of the Bible’s position on slavery? I am concerned our young white students will read such passages and wake up to civilization’s sordid past.”

Additionally, the Bible contains depictions (some graphic) of rape, bestiality, incest, torture, cannibalism, infanticide, and just a ton of murder, including the drowning of nearly every human on Earth, and pretty much every other atrocity known to humanity. Yet, as Stevens points out, the Bible is available in many schools, some which specifically teach its contents, and you can find one in every hotel room in the U.S.

Stevens is something of a legend in Florida, having made real change in the past by taking action that exposes the hypocrisy of Republicans and the general Christian bias that remains in the U.S. government as a whole. In 2015, he got multiple cities to drop the “moment of prayer” that is standard before city commission meetings by requesting that he be allowed to lead some of these prayers in the name of Satan.

He says he hasn’t yet heard back from any of the school districts to which he sent his latest petition, but he’s keeping a close eye on who opens the emails he sent.

“My activism in the past has been wildly successful,” he told NPR. “And, I imagine, will continue on a similar trajectory.”