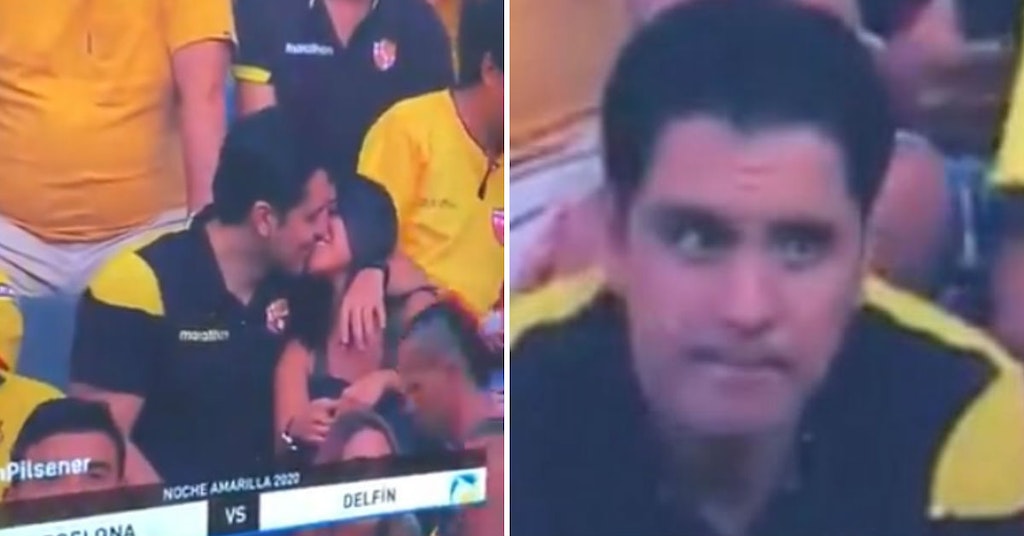 One soccer fan is regretting his choices after he was caught on the jumbotron kissing a woman who was apparently not his girlfriend or wife. He might have been spared at least global humiliation if he had played it cool, but he didn’t. After wrapping his arm around the woman next to him and planting a tender smooch, he looks up to the screen and his face immediately changes, he removes his arm, and you can actually see the moment his soul leaves his body.

Thanks to his reaction, the video was posted on Twitter and has now been viewed over 27 million times.

But that’s not the end of the story. The video went so viral that the man, identified as Deyvi Andrad, took to Facebook to yell at everyone for making fun of him for getting caught cheating.

Metro more accurately translated the Facebook post from Spanish, and, surprise surprise, he’s attacking women more than anybody else.

“If it was a woman was in my place what would you do?” he wrote. “Various videos have been circulating of unfaithful women but they haven’t been made fun of as much as me. I hope you never have to be in my position.”

Those women probably didn’t get caught cheating on a jumbotron and realized it two seconds later. Don’t get mad at another gender just because you managed to create a moment of pure comedy with your mistakes and facial expressions.

“No one is going to be able to damage my image, God is big and strong and these women who are criticising me, I know too have cheated but they still comment,” he added.

Not only does he confirm in the post that he was indeed cheating, he confirms that his relationship with the woman he cheated on is over.

“You’ve already destroyed my relationship, what more do you want?” he said. “I hope this doesn’t serve you in any way because you are only hurting a son of God.”

Unfortunately for him, this only made the whole thing funnier to people.

Como se dice “You hate to see it” en espanol?

He would have been wayyyyyy better off just rolling with it.

1. Less chance of wife seeing it since it wouldn’t go viral
2. Wont piss off side chick

His reaction basically kills it for both women.

When the side chick realizes you ain’t ever leaving your wife for her. pic.twitter.com/7rOSYFfETt

The look of pure fear pic.twitter.com/bYn4VdXZ3D

Try not cheating next time, buddy.