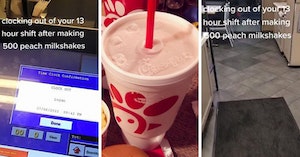 A Chick-fil-A employee went viral on TikTok after he posted a video about making 500 peach milkshakes on his 13-hour shift.

The video, which has since been deleted, was only five seconds long. In it, TikTok user Michael (@m_adams40) recorded himself clocking out on the register. In the overlay text, the fast food chain employee wrote, “clocking out of your 13-hour shift after making 500 peach milkshakes.”

The camera then panned to the floor and zoomed in on the mat he presumably stood on for that entire time, and viewers could hear him whimper.

The video was posted on July 6 and had been viewed over 231k times before the account went private.

It clearly struck a chord with TikTok users, some of whom shared their own experiences working for Chick-fil-A and other fast food chains.

One user said, “LITERALLYYYYY!!!! there’s always those customers who get like 8 milkshakes in one order and 5 are always peach milkshakes.”

“I WORK at rushs and I make the milkshakes and everyone gets the peach ones and it angers me on the inside,” another commiserated with Michael.

“was on f2f once and got like three to four ‘ill have 2 peach milkshakes’ in a row,” yet another user said.

“When you just got an order with multiple peach shakes and then the dispenser runs out. And no one brought up extras for the dessert fridge,” one person commented.

Many shared stories of their experiences working “shake season” (a.k.a. the summer months) at Chick-fil-A.

One commented, “i do not miss being on icecream during peach shake season it’s actually awful.”

“i don’t miss working summer shifts there, everyone and their mom orders a shake, especially during a rush,” another user stated.

A third said, “Chick fil a was my first job, so glad I left I was the shake master so that was my life every time.”

“i was put on desserts the day after the milkshakes came out. worst shift of my life,” yet another person commented.