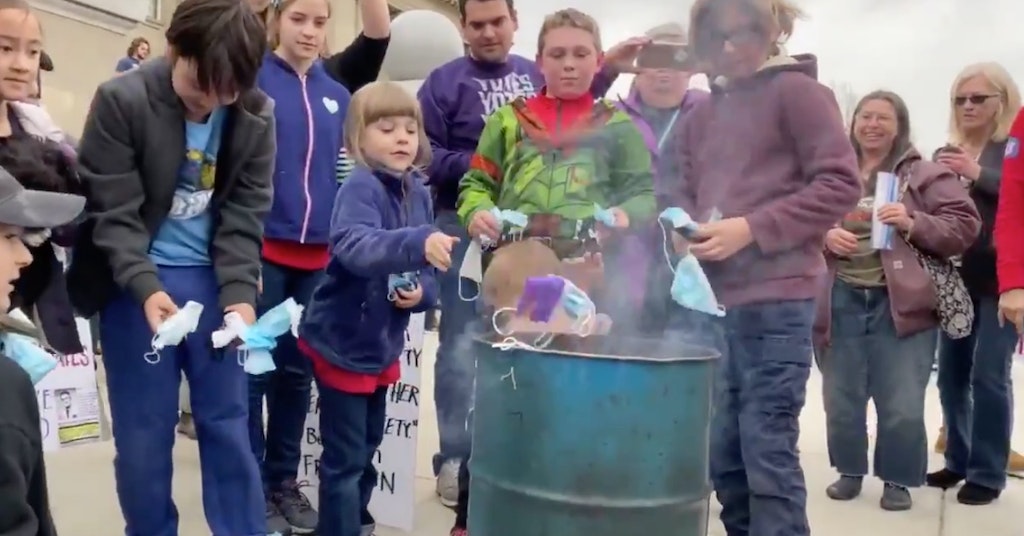 
Despite how close we are to getting out of this pandemic at long last, some people just can’t stop acting like total fools.

Anti-maskers in Idaho held a protest on the Capitol steps during which they burned a bunch of surgical masks in a barrel. While this would have been ridiculous enough, the video shows the group encouraging young children to dig into a trash bag filled with masks and toss them into the fire.

In the footage, a group of at least seven kids, all of whom look to be younger than 12, are gathered around the barrel. They grab masks by the fistful before the adults warn them not to throw everything in at once.

“Destroy them!” one child yells.

“We don’t want none of that world anymore!” adds another.

Per The Guardian, there has never been a statewide mask mandate during the pandemic and most Republican lawmakers in the state opt to go maskless during official duties. However, some counties and cities have introduced their own requirements.

Other photos from the event suggest that several hundred people showed up to the protest, the lieutenant governor and a state representative.

Frustrated people took to social media to condemn the event.

And the fact that children are being taught to find glee in destroying something that’s helping people stay safe from a pandemic is also disappointing to watch.

We could have been mostly free of this pandemic months ago like better countries were, but instead, here we are, half a million people dead and people who don’t believe in science setting masks on fire in the name of “freedom.”