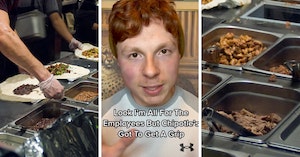 A TikToker is airing his grievances with Chipotle after he claims an employee wore AirPods the entire time he was trying to order his food.

“Look, I’m all for the employees, but Chipotle’s got to get a grip,” Christian Grossi told viewers in a video shared last week. “I walk into Chipotle, just left the gym, gonna get a bowl for lunch. Right? Everything’s going fine up until I get to the counter.”

That’s when Grossi says he was shocked to realize the worker putting together his bowl was wearing AirPods in both ears.

“I used to work in the food industry, and having headphones in and talking to customers was like golden rule number one you can’t do,” he said.

Still, he tried to get his order going without complaint, but it didn’t take long to realize the employee couldn’t actually hear him. Rather than take the AirPods out, Grossi says the employee just kept asking him to speak louder and repeat himself, allegedly repeatedly getting parts of his order wrong.

At the cash register, he asked the next employee whether wearing AirPods was allowed in the restaurant, and she told him that the manager was out so they were kind of doing whatever they wanted.

To cap it all off, Grossi says the employee who made his bowl finally took an AirPod out when he told the cashier he ordered a chicken bowl.

“‘No no no no, he got brisket with queso,’” he allegedly said. “I’m like, no I didn’t. I’m lactose intolerant. You want to check that bowl? I’m telling you, there’s no queso or brisket on there. She opens up the bowl and goes, ‘That’s a chicken bowl.’”

Viewers were split on the response to Grossi’s complaints, with many sympathizing with why an underpaid employee would try to find some way to enjoy his day.

“If they pay minimum wage, u give minimum effort,” @drconnors_md replied.

“As a employee at Chipotle, we have given up,” explained @ali_lopez29. “We are extremely understaffed and managers don’t help out.”

Others agreed with his frustrations, with one viewer calling Chipotle “overpriced and overrated,” and several scoffing at the idea that fast-food workers want more money for their jobs.

“If they got paid 15 an hour they would probably care a little bit more,” @kevin.jkennedy15 fired back.