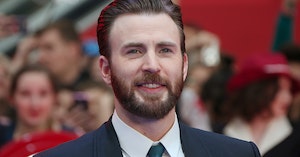 Chris Evans is weighing in on the debacle over the same-sex kiss in Pixar’s Lightyear.

The Toy Story spin-off made headlines around the same time that Disney was facing backlash for its failure to oppose Florida’s “Don’t Say Gay” bill — including accusations from Pixar employees that the company routinely makes them remove blatantly queer content from their films, regardless of how comparable it is to heteronormative content and characters that are allowed to exist in these worlds.

Possibly in response to the backlash, it was announced that Lightyear would reinstate a same-sex kiss between two female characters in a committed relationship. LGBTQ+ fans and allies were pleased, conservatives and bigots have been furious, and Disney’s subsequent refusal to remove the kiss for anti-LGBTQ+ countries like Saudi Arabia has resulted in it getting banned there.

Variety recently asked Evans, who voices Buzz Lightyear, what he thought of the whole situation.

Calling Disney’s decision to reinstate the kiss “great” and something that “makes me happy,” he also dug a little bit deeper into the heart of the issue.

“It’s tough to not be a little frustrated that it even has to be a topic of discussion. That it is this kind of ‘news,’” he said. “The goal is that we can get to a point where it is the norm, and that this doesn’t have to be some uncharted waters, that eventually this is just the way it is. That representation across the board is how we make films.”

“It’s an honor to be a part of something that is taking those steps, but the goal is to look back on this time and just be shocked that it took us this long to get there,” he continued.

Evans’ comments appropriately suggest that queer representation in media shouldn’t be a big deal while also acknowledging that, unfortunately, it still is. And it will continue to be as long as heavy-hitters like Disney toe the line on inclusion until they face serious backlash and are forced to pick a side — even in this ultimately minimal way.

And as a little added bonus, he also called bigots freaking out about “gay propaganda” in Lightyear “idiots” who are “afraid and unaware and trying to hold on to what was before.”

“But these people die off like dinosaurs. I think the goal is to pay them no mind, march forward and embrace the growth that makes us human,” he said.