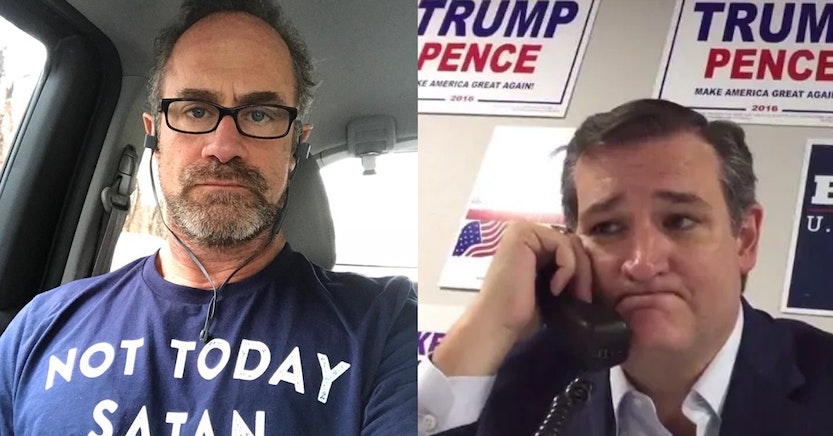 Chris Meloni dunked on Ted Cruz this week after the Senator took a misguided swing at comedian Trevor Noah for his commentary on gender reveal parties.

And yes, that is quite the pile on — let’s back up.

After the news broke that yet another gender reveal party had ended in disaster, the conversation started up again about why these sort of events need to exist at all.

In addition to the fact that they’ve gotten so out of control that they’ve started multiple wildfires at this point, gender reveal parties also seem increasingly archaic as our understand and expression of gender changes. Do we really need parties to announce a baby’s genitals?

The Daily Show host Trevor Noah says no, and the headline his remarks were twisted into on far right site The Daily Wire drew commentary from Texas Senator Ted Cruz, who clearly thinks he’s on a roll this week.

“A fair point,” Cruz said in response to Noah’s reminder that kids might have different thoughts about their gender later on in life. “Many liberal males never grow balls…”

It was the wrong thing to say for a number of reasons, but the hilarity of one of the prominent Republicans who initially dissed Donald Trump during his campaigning days but came crawling back to serve at his feet once he won the nomination is impossible to skip over.

He wasn’t the only one to start dunking on Cruz for what the Senator clearly thought was a very clever joke.

Maybe when Cruz is finished sweeping up the pieces of his shattered dignity, Meloni can help him solve the case of whatever happened to his own balls. I’m sure there will be plenty of crime and corruption to uncover in the process.