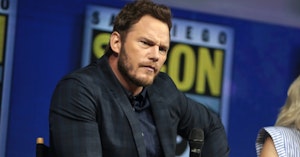 An entire online debate was sparked by a Twitter meme asking people to vote out their least favorite celebrity Chris, and enough people voted for Chris Pratt that his name was trending for a while. This surprised some, while others cited the accusation that Pratt attends a church known for its overt homophobia as well as the time he flashed Amy Poehler without her consent on the set of Parks and Recreation. He is also allegedly a Trump supporter.

In response, multiple celebrities who have worked with Pratt on Parks and Recreation as well as the Marvel films have come forward to defend him.

“I’ve spent hours & hours sharing my deepest truths with this man, as he has with me,” tweeted Guardians of the Galaxy director James Gunn. “Please stop assuming what he believes, politically or in any other way, because he’s a Christian.”

In addition to Gunn and fellow Marvel actor Mark Ruffalo, Robert Downey Jr., Zoe Saldana, Jim O’Heir, and even Terry Crews came out to defend Pratt, often praising his kindness to them in person and claiming that people are attacking him for being Christian and generally quiet about politics. Some pushed back on these assertions, however, pointing out that the criticism around Pratt is about the specific church and politicians he allegedly supports and his action on-set.

Others pointed out that being apolitical or “quiet” about politics is often a function of privilege, while others don’t have that luxury because politics directly affect their lives whether they like it or not.

A few people looked through Pratt’s list of followed Twitter accounts and found that although he may be quiet on the topic, he doesn’t seem to be apolitical. He currently follows a number of far-right figures including Tucker Carlson, Dan Crenshaw, and Ben Shapiro.

At the same time, folks made the point that other actors, particularly women and actors of color, have endured far worse than being voted the worst out of four celebrities. Brie Larson, for example, faced intense harassment and death threats for the crime of being a female comic book hero. Anthony Mackie dealt with similar harassment for being Black. And let’s not forget about Zendaya and Tessa Thompson, who suffered from both.

Yet there didn’t seem to be a wave of co-stars and other celebrities coming out to defend them against misogynists and racists.

Chris Pratt has not yet publically responded to the controversy and the debate is raging on, but the next presidential debate and the release of the Borat sequel might knock it out of everyone’s mind, so get your opinion in while it’s hot.