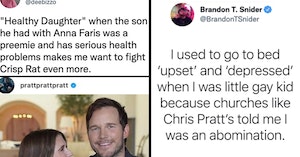 Chris Pratt is apparently all up in his feelings again following the internet backlash to his weird Instagram post in praise of wife Katherine Schwarzenegger.

“I went to bed last night kind of upset and depressed, and woke up feeling crappy, and I didn’t want to work out,” he said in an Instagram story last week.

The actor didn’t specifically call out the internet’s ire as the reason for his being sad, but considering enough people were talking about how bizarre and potentially cruel his original post was that it resulted in his ex-wife Anna Faris trending on Twitter, it seems likely that’s what got Pratt down the same evening.

But he couldn’t be kept down for long, and you know why? That’s right: God. “I knew though that if I put on my Christian music playlist and I got out in the woods and ran that I’d feel better, but I just didn’t want to,” Pratt continued. “And I did it anyways and gosh, was I right. It felt amazing.”

He said that once he got out into the woods, “God sat down there right next to” him.

“I actually got emotional out in the woods… And I just felt like there was another in the fire next to me,” he said. “I just wanna say, all glory to God.”

Considering how much of the backlash surrounding Pratt generally involves his commitment to a homophobic church and refusal to acknowledge that, and that the specific backlash against his Instagram post about Katherine was partly because of toxic masculinity idealizations particularly prevalent in evangelical communities, this new Instagram story didn’t exactly garner a positive response, either.

Of course, anyone who has actually had to experience evangelical culture up close and personal is not surprised about literally any part of this story.

Pratt has money, a family, a second family he maybe sometimes forgets about, and all the voice-over roles no one wants to listen to him in, so he’ll probably be okay. Oh, and Christian music — that’s obviously the most important part of all.