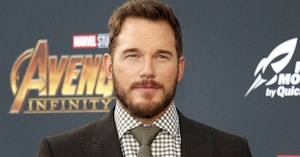 A new edition of the Marvel Guardians of the Galaxy comic book series came out last week, and the latest installment reveals that hero Peter Quill is in a polyamorous bisexual relationship. That led fans of the movie franchise based on the comic book to wonder about actor Chris Pratt, who portrayed Quill in the two Guardians movies as well as related Avengers movies.

As a number of sources, including Entertainment Weekly, point out, Pratt is also a member of a church with ties to Hillsong Church, an Australian-founded megachurch chain that counts a number of celebrities among its attendees. Pratt was called out for his membership in the church by fellow actor Elliot Page (formerly known as Ellen Page before announcing he is transgender using he/they pronouns.) As W Magazine reported then, Page called Hillsong “infamously anti-LGBT,” and called Pratt into question for his affiliation with it.

Pratt addressed the controversy at the time, saying that his Zoe Church—considered part of the Hillsong family—”opens their doors to everyone,” and adding, in a substantial Instagram post (as reported by Buzzfeed), “Hate has no place in my or this world.”

Revelations about Guardians of the Galaxy #9, published Dec. 9, thrilled a number of the comic’s fans, especially the section about Quill’s relationship with a male and a female character.

But that led a number of fans to wonder how Pratt would reconcile playing Quill, given both the church he’s affiliated with and these new revelations. While some wondered what his reactions were, others were more prurient in their reactions.

But as at least one person surmised, “Now, Twitter, we know that’s not why Chris Pratt is trending.”