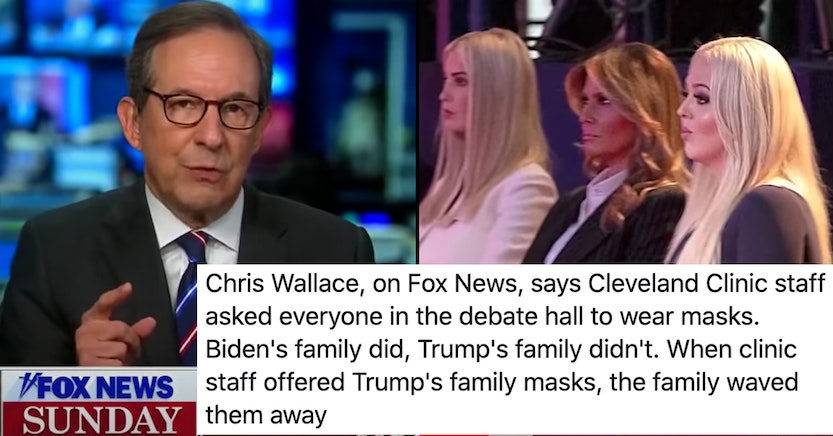 Only a week ago, the world watched in horror as Donald Trump and Joe Biden “debated” on stage. The debate mostly consisted of them yelling over moderator Chris Wallace, and the highlights were Trump shouting out the Proud Boys and attacking Biden’s sons, plus a little bit of Biden refusing to support the Green New Deal.

And just a few days later it was announced that Trump tested positive for COVID-19. It’s not entirely clear when he first became aware of his diagnosis, or the possibility of exposure from White House staffer Hope Hicks. Since his positive test result, dozens of other staffers and high-ranking Republicans have tested positive as well as the First Lady and White House Press Secretary Kayleigh McEnany, who was still strolling around D.C. maskless as of yesterday.

Chris Wallace is pissed. On yesterday’s episode of Fox News Sunday, he went off on the whole Trump family and administration officials, who all refused to wear masks at the debate against the rules of the gathering:

“The rules from the Cleveland Clinic could not have been more clear,” he said to Trump aide Steve Cortes, who made a sacrificial appearance. “Everyone, everyone in the audience was to wear a mask. After the first family came in, they all took off their masks. So did the White House Chief of Staff Mark Meadows. Do they think that the health and safety rules for everybody else do not apply to them?”

Cortes tried to explain that everyone in the room had been tested, but Wallace interrupted him.

Cortes tries to say it’s a matter of personal choice, stating, “Everyone there was tested in the crowd, they were distanced from each other, people can make reasonable decisions for themselves.”

“No, actually they can’t,” Wallace answered. “There are the rules, and they’ll be kicked out next time.”

I almost hope Trump recovers in time for the debate so we can all watch that happen.