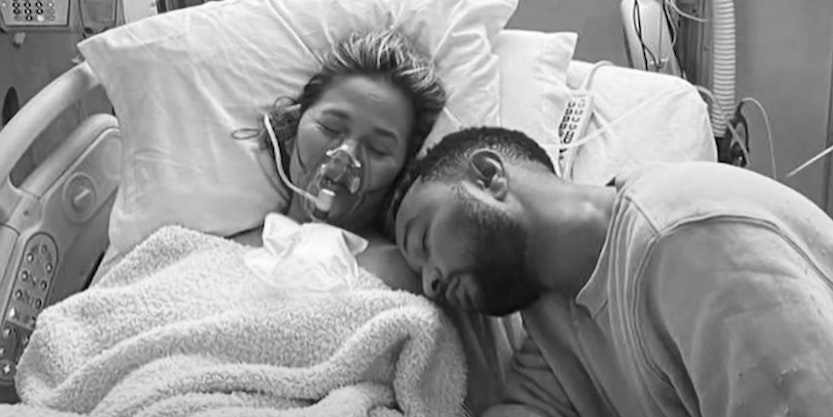 In a heartfelt Twitter and Instagram post, model and TV personality Chrissy Teigen announced that she and her husband, singer John Legend, lost their unborn baby boy, Jack. Most on social media showed great empathy for the couple, with a number of tin-foil hatted exceptions.

“To our Jack,” she wrote. “I’m so sorry that the first few moments of your life were met with so many complications, that we couldn’t give you the home you needed to survive. We will always love you.”

Teigen was roughly halfway through her third pregnancy but ended up in the hospital late last week following bouts of continual bleeding.

“We were never able to stop the bleeding and give our baby the fluids she needed, despite bags and bags of transfusions,” she said of her miscarriage.

People from all over the world, including an endless number of celebrities, offering condolences.

In September, Teigen revealed she was being put on bed rest by her doctor for a couple of weeks. Shortly after, when complications became more serious, she was told she had a weak placenta.

Of course, not everyone could be empathetic. Folks arrived with the ridiculousness that is the QAnon conspiracy.

Incredulously, under the Instagram handle @raechelcorrine, one woman wrote on Teigen’s IG post: “I don’t trust or believe you. I think you sacrificed your child to someone higher. You and your husband shouldn’t have sold your souls to the deep state.” Her comments had nearly 100 likes as of this writing.

Another person using a burner account, @Haleybluedaily, responded directly to Teigen’s post: “THIS HAS TO BE STAGED! NO WAY SOMEONE WILL TWEET ABOUT THIS HOURS AFTER IT HAPPENED. I THINK THIS IS A DISTRACTION FROM ALL THAT EPSTEIN THING. #SaveOurChildren.”

It seems that whether based on QAnon conspiracy or not, people continue to feel emboldened to be increasingly nasty.