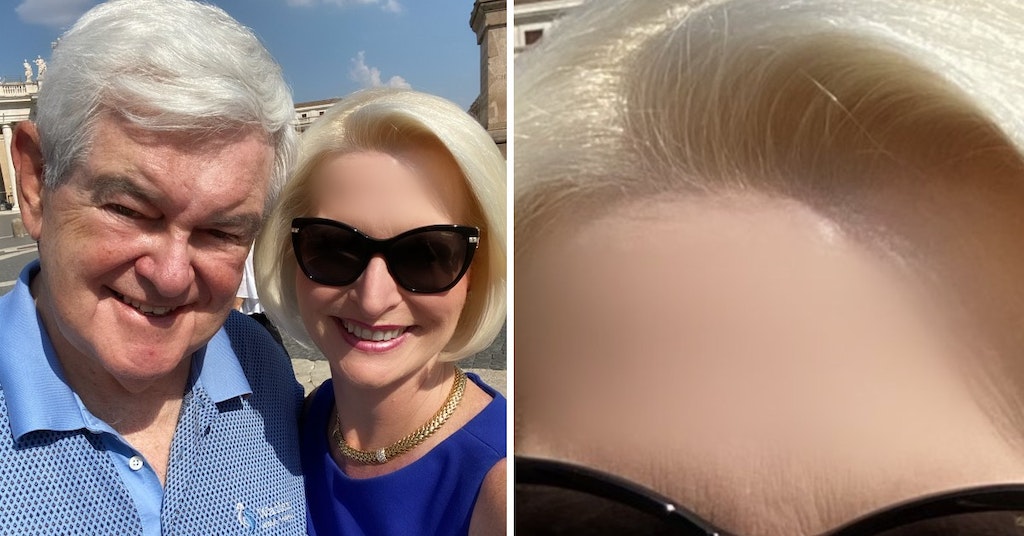 Newt and Callista Gingrich caught some mockery on Twitter after Callista posted a photo of them both sporting a fairly rushed editing job on her face while clearly leaving Newt’s face alone. Many are assuming that Callista used the popular photo editing app Facetune to blur out her forehead wrinkles, stopping short of the hairline so that it’s obvious upon close observation.

Although there’s nothing wrong with wrinkles or pores or skin that’s not all the exact same color, nor is there anything wrong with using filters or photo editing if that’s what you want to do, the contrast becomes striking when you put the two right next to each other.

The weirdness of the contrast prompted a number of jokes, with many expressing that they felt bad for Newt, former Speaker of the House and current Trump supporter, since his wife didn’t seem to care enough about him to do a quick touch-up on his face.

The photo spread so far that model and legendary Trump critic Chrissy Teigen weighed in.

Not only did she point out the fact that Callista left her husband out of her efforts to blur perceived imperfections out of the photo, but she also recorded herself doing so on Newt’s face, offering a “you’re welcome” to the former speaker. The demonstration also might help Callista’s future Facetune efforts.

The result is somehow simultaneously better and worse.

As of this article’s publishing, neither Newt nor Callista has offered Teigen a thank you for her assistance.

Meanwhile, the jokes under Callista’s original post, including people’s own edited versions of the photo, are almost funny enough to make you forget about all the country’s many problems.