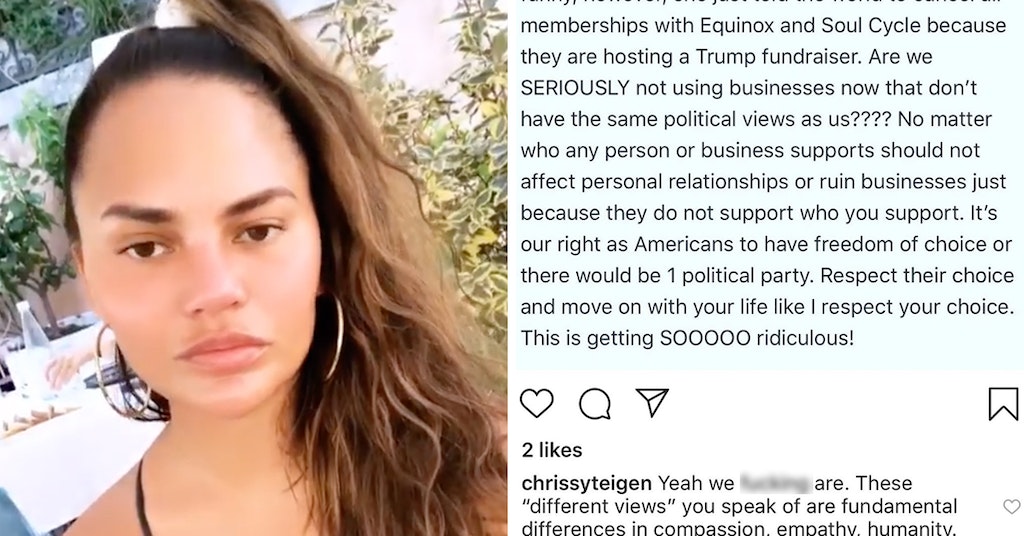 Chrissy Teigen And Others Call For SoulCycle Boycott Over Trump Support

SoulCycle took the fitness world by storm years ago, formatting a 45 minute spin work out in a venue that combined elements of a nightclub, a yoga studio, and a cult. For people with lots of disposable income who like cardio and being yelled at by blonde women, it’s the perfect place to spend a Saturday morning. Unfortunately, its attendees have unwittingly (or not) been supporting Donald Trump.

Hey @Equinox – what’s your policy for canceling memberships once a member finds out your owner is enabling racism and mass murder?

There are a handful of billionaires who own everything and many support Trump. Practically speaking, it’s probably impossible to completely avoid them. But considering @Equinox’s clientele and how they’ve pandered to us, this one feels particularly hypocritical and shameful.

everyone who cancels their equinox and soul cycle memberships, meet me at the library. bring weights

Ross finally responded to the uproar after when Miami Dolphins player Kenny Stills publicly objected. Ross also owns the Miami Dolphins. He has a finger in a lot of pies. Ross released a statement in the Miami-Herald about his relationship to Trump:

“I have known Donald Trump for 40 years, and while we agree on some issues, we strongly disagree on many others and I have never been bashful about expressing my opinions,” he wrote. “I have been, and will continue to be, an outspoken champion of racial equality, inclusion, diversity, public education and environmental sustainability, and I have and will continue to support leaders on both sides of the aisle to address these challenges.”

The thing is, people aren’t simply objecting to a friendship. Ross was planning an election fundraising lunch in the Hamptons for Trump. He wants to see Trump reelected, so he can continue to erode democracy and dehumanize immigrants, refugees, LGBTQ people, and eradicate reproductive rights. They’re not just two old pals shooting the sh*t on the weekend. They’re working to make the world a worse place. And they’re using your gym membership money to do it!

Related Companies, which Steve Ross controls and owns the majority of, is the parent company of Equinox/Soul Cycle

As Eichner wrote, we live in a world with a few people at the top who own basically everything, and it can be really hard to avoid putting money in their pockets. You may do so unwittingly, you may do so because there isn’t another option. There are, however, a lot of better options to SoulCycle. Maybe bike to the library to meet Chrissy Teigen?