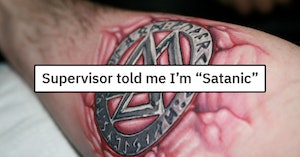 A post on the “Antiwork” forum on Reddit is claiming that a Christian supervisor told the OP that they were Satanic, evil, and going to hell after he found out about the tattoo the worker wants to get, which includes some kind of runes. Apparently, this supervisor is friends with the tattoo artist the Redditor was working with (emphasis on “was”), and after OP told the artist where they worked, it got back to the very religious boss, who may have broken U.S. anti-discrimination laws.

This occurred in a “small town in Missouri” and a workplace where everyone else is explicitly Christian, which comes as no surprise to anyone who knows anything about this country. Because of this, the OP felt the need to hide their own religious beliefs — an unfortunately very common reality shared by many who live in many parts of the U.S.

“Well I had scheduled a tattoo appointment to get some runes on my arm from my religion (which is literally a protection formula of runes) with a tattoo artist well known in town,” the Reddit poster wrote. “My supervisor (who’s probably the most religious openly among my coworkers) is friends with the artist.”

After the artist failed to act professionally and told the worker’s supervisor about the planned religious tattoo, the boss approached the OP and proceeded to say a number of awful things to them over something that doesn’t involve him at all.

“Come today my supervisor approaches me and says he heard that I was getting a tattoo and that he didn’t like what I was getting. So I told him that it’s not really his business in the most respectful way I could. He proceeded to tell me that he’s surprised I was hired because normally they don’t hire ‘evil’ people.”

“I was speechless honestly, I’m already anti social and now I’m being told I’m evil so I kinda just sit there. He then goes on to tell me that I’m going to hell and that those symbols make me ‘a satan worshipper [sic].'”

Stunned, OP simply apologized and then left for lunch, but they are now seeking legal advice on how to handle the situation, fearing that they will be pushed out of their job or eventually fired on false pretenses. Firing someone for having religious beliefs outside of the norm is illegal in the U.S., but bosses often and easily get around this by finding a bunch of fake reasons to can people they’re bigoted against.

“My biggest fear now is them now finding every reason to make me look bad in the workplace so they can fire me or worse make the environment and the work I do super hard or something of that sort to try and force me to quit.”

There is a real chance that this Redditor could become a victim of “quiet firing,” and commenters have been advising them to document any interactions with this supervisor going forward. Missouri is also thankfully a “one-party consent” state when it comes to recording conversations, which means the OP can secretly record interactions with their boss because they have their own consent.

Unfortunately, the worker is always at a disadvantage under the weak U.S. labor laws, especially considering the fact that workers usually have a whole lot less money than a whole company and lawyers aren’t cheap. Regardless, it’s worth looking through the comments in case you ever find yourself in a similar situation considering the number of Christian nationalists out there.