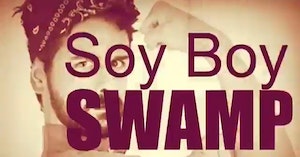 A new online dating platform has arrived on the scene for Christian singles, but only if you agree that women should submit to men and that you should be getting married and pumping out babies as soon as possible. The service is called Dominion Dating, which is itself a reference to a Bible verse that says that men should have “dominion” over their home and family.

“We believe pursuing marriage locally, through your church & personal networks, should come first!” the website reads. “However, with so many churches & Christians confused on biblical marriage & sexuality, it is increasingly necessary for many singles to look beyond their local context for a godly spouse.”

“Godly spouse” apparently means no feminists and no “soy boys,” according to their promotional video, which is really something.

The video begins with the sound of rain and an ominous bell tolling with a flickering quote by some guy claiming that “our” culture is “dying from lack of marriages.” Cut to a flash of a sentence reading “singleness is a gift” over the faces of some slack-jawed young women and then what is definitely a white guy in blackface and a clown costume with a comical mallet grinning as he starts to swing it at the camera.

Apparently the death of culture looks like a cartoon racist murdering all the hot singles in your area.

The weirdness does not end with the video, however. If you are going to give your money to Brandon, that means you have signed on to their “member’s agreement.” This is separate from any legal terms of service agreement that you skip reading every time you sign up for a new thing. Members are expected to adhere to a set of moral principles and commitments if they’re going to use Dominion Dating.

Beyond the sexism requirements and a promise to force your future children to be Christian, the service requires users to have been a member of an Evangelical church for at least three months prior to signing up. Also, members are expected to have no fun whatsoever.

“We commit to pursuing sexual purity as we prepare for marriage. This includes abstaining from acts of fornication, watching pornography, dressing sensually or immodestly, and entertaining lustful thoughts. We will daily fight temptation according to God’s Word, through confession to God & accountability to local church family, unto repentance & holiness.”

And it doesn’t end there. At the end of this agreement, readers are told to also read and commit to the “principles and etiquette” of the official Dominion Dating manual. Unfortunately, you can also get access to this manual by signing up.

These requirements are so extreme that even other Christians are baffled as to how they reached some of their conclusions.